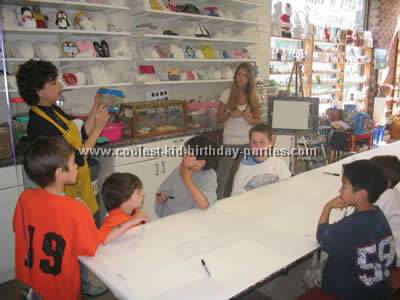 My son, the animal lover, wanted his birthday kid party theme to involve animals in some way. I found a local arts and craft place by my house that had the most perfect party, although I am positive that if I had a little more time I could have easily had this at my house for a lot less than what I paid this place!

Once the kids arrived they were totally drawn into the 10 gallon fish tank that housed about 2 dozen hermit crabs. Once everyone arrived they were told to choose the travel cage that they would like. They were given paint markers and free reign to decorate the outside of their cages however they liked. Some drew pictures of the ocean, some wrote what they were going to name their crab, and some drew a pirate ship. It was interesting to see everyone’s interpretation. 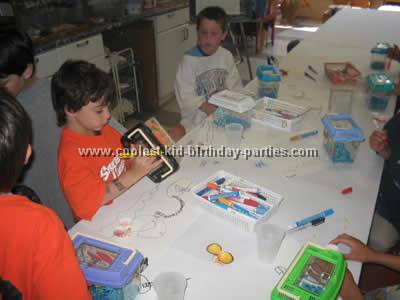 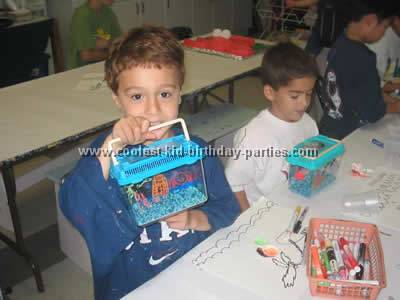 Next they were given a cup pre-measured with gravel in my son’s favorite color blue. Then they were given two flat shells, one that held food and one that held the sponge soaked in water. They decorated those with paint markers as well. They were each given a small bag filled with hermit crab food and a small sponge soaked in water. They placed the sponge and food on the feeder shells and put them into the cage. 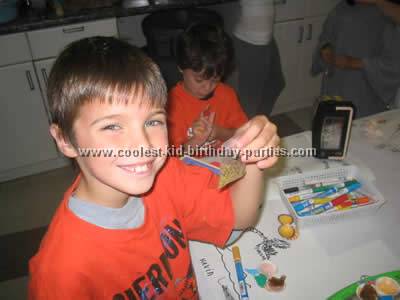 Next came the fun part, they all gathered around that 10 gallon fish tank and started picking out their ideal crab. 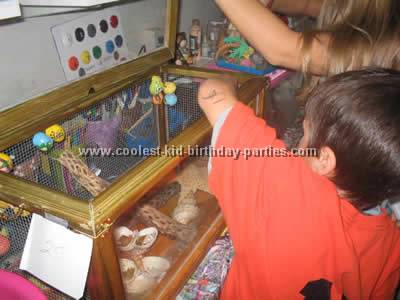 Of course none of them walked out with the ones they originally picked out! They all must have changed their minds 100 times over! It was hysterical! 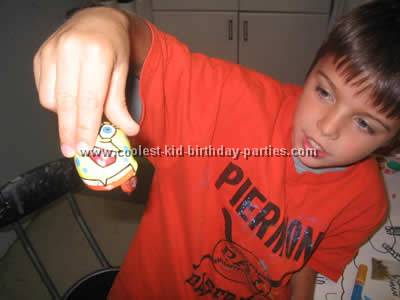 The invitations that I sent out were ocean-themed as were the decorations that I used for the kid party theme. I actually baked a cake that was in the shape of a crab, which was a hit. The kids loved seeing that. 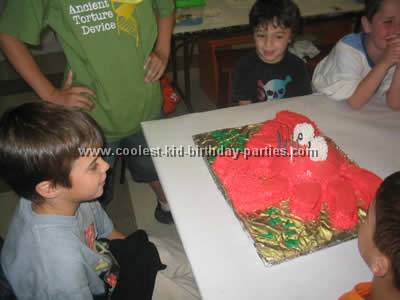 They decorated their own ice cream sundaes which was a lot of fun.

There were no games because to be honest with you they were more involved in what their hermit crabs were doing but if I had to invent games I would think that a hermit crab race would have been hysterical! Some of them were really moving around fast! How funny would it be to make a cardboard two lane racetrack or something and have them race to a finish line. The winner gets a piece of candy. I’m sure a million hermit crab themed games can be thought of but in my own case because the party was at a place I was limited but if I had this party at home I think the possibilities of what we could have done would be endless!

Each child went home with a small goody bag filled with candy, a small bag of hermit crab food, an empty spray bottle trainer for the hermit crab, a hermit crab care sheet (printed off the internet) and the hermit crab itself with the travel cage gravel and feeder shells. All of these supplies are very easily found on line. The hermit crabs were shipped from a company in Florida that raises them. They were all very lively and great. The kids had a fantastic time and were very anxious to get their new pets home. I wasn’t sure how the parents were going to feel about me when they found out they would be taking home a live animal (I told them when they rsvp’d) but I have to tell you the positive response was overwhelming! The parents were very happy and the kids had a really great time.

I would do this birthday kid party theme again in a heartbeat, the only thing I would change is that I would do the party at my own house where I could really let loose and have fun interacting with the crabs and the kids (having races, teaching them “tricks” etc….you would be surprised as to what these kids would think of!)