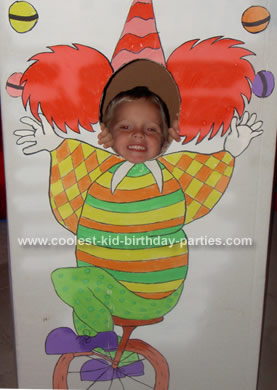 I had my husband transform our pole barn into a big top tent for this carnival party! He made 4 “game booths” out of wood and red, white and blue tablecloths from the dollar store. He also added red, white and blue rope lights for a real circus effect! Then I bought about 15 stuffed animals’ from the dollar store and stapled them onto the front, sides and back of the booths like a real carnival! We had penny toss – kids threw ping pong balls into fishbowls (just colored water no fish) ring of fire – I hung a hula hoop with “flames” that I made out of red, yellow and orange construction paper that the kids threw a stuffed lion through.

Super Soaker – the kids had a squirt gun to knock over three empty pop cans. And a duck pond (galvanized tub with water and three ducks labeled 1 2 or 3 from the dollar store) for the younger kids. 1 picked a prize from bin 1, 2 from bin 2 and so on. I bought a bunch of little prizes from the dollar store and had them in boxes behind each booth. When the kids played each game they got to pick a prize. I gave them an empty bag as a goodie bag that they filled by playing games. I had help from my sister, grandmas and grandpas and 8 year old son to man the games.

At the carnival party I also had a sucker tree and tattoo/hair painting booth – huge hit!!! I rented a pony to give pony rides for an hour. And my husband made a ride for the kids – the kid-er-piller. He took five of those big blue plastic barrels laid them on their side, cut a hole for the kids to sit in and put wheels on them. We painted them to look like race cars (NASCAR – Dupont LOWES etc.) then we pulled it with the riding lawn mower – huge hit!

For the food at the carnival party we had French fries – served in cups of course! With vinegar in a clear glass shaker jar like they have at the circus if they wanted. My mother in law made elephant ears – again huge hit! She even worked the “concession stand” and shouted – elephant ears come get your elephant ears! Even the adults loved this! We had popcorn in bags that I found at the dollar store – white with red stripes that said popcorn and bottled water and pop. Oh yeah, and hot dogs and sausage with green peppers and onions. I made cupcakes – I found it’s easier for the younger kids than cake – that looked like popcorn! I frosted a normal cupcake then added dyed mini marshmallows that I dyed yellow (in 3 batches – one white one light yellow and one dark yellow) and cut them with kitchen shears to look fluffy. Cute!! Everyone thought they were real popcorn! I made bands on the computer to go around the bottom that matched the real popcorn bags – white with red stripes and popcorn in a circle in the middle.

We had about 15 kids’ ages 1-8 and about 10 adults. I would say the total cost of the party was between $200-$250. Everyone said it was the best carnival party they had ever been to and I have already stared planning his next party! I love seeing the kids have fun!