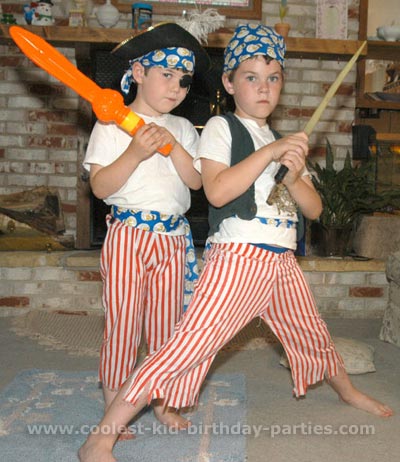 We had this pirate party twice now. Once it was very hot and we had 30 kids (my favorite one of the two). The other was 5 kids and nice out (harder to keep entertained).

Out of all the childrens birthday party ideas for a pirate theme, I thought the invitation in the bottle was the best. We all as a family drank lots of bottled water for a month or two to get the water bottles. We peeled the labels off and put our own on. The label had a photo of the birthday boy on it. 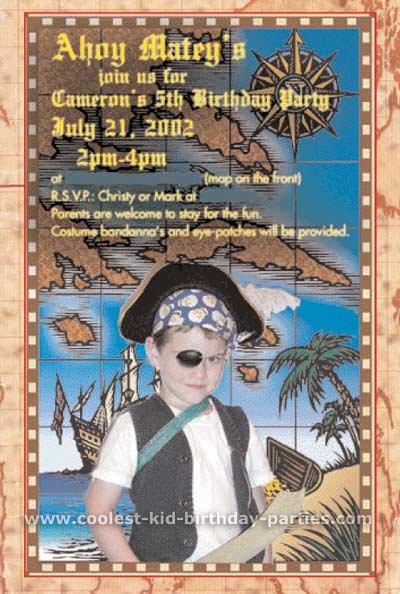 We scanned a map and on one side added a photo with a pirate picture in the background and the invite info on it. On the other side of the map we showed how to get to the party with landmarks: Christopher’s Cove, Blackbeards Inn, and so on. 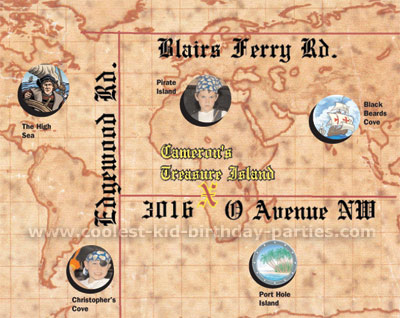 I printed the invites on both sides on tan paper, tore the edges, crumpled up the paper and then rolled it into a scroll and tied it with twine. I then stuffed it into the water bottle with the label on it, put twine around the neck of the bottle and put a tag with the name of the person invited on it. We hand delivered them.

I bought some hats from the Long John Silver in town (actually free, but I offered). We also bought some material way after Halloween in the $1 bundles of skull bones and made bandanas. We handed them out at the beginning of the party. 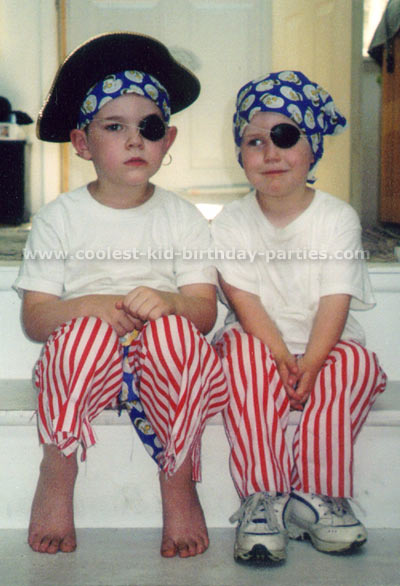 I tried to get them to color at the beginning (no luck) – too busy running around. We had goose feathers that we bleached for swords. They mostly just took them home or wanted me to hold them and save it.

We made palm trees out of carpet tubes for the trunk and umbrellas stuck in the top with grass skirts wrapped around the umbrellas. Our family made a pirate boat for rides around the 1/2 acre my parents own.

One of the childrens birthday party ideas I wanted to do was make a pirate ship. I got cardboard boxes from a place in town that delivers refrigerators. They were happy to give them to me. We made porthole and mast poles out of carpet tubes (also happy to give them to me from the carpet store in town). We used old white sheets for the masts. 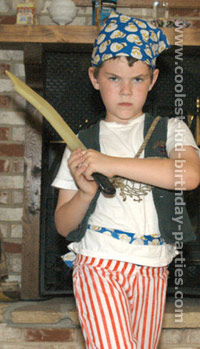 Each child sat next to the birthday boy and watched him open the gifts, then they went out back and take a ride on the pirate ship.

We had a blue water cake with a toy pirate boat and pirates on it. Sand for the beach was graham cracker crushed up.

A treasure hunt is one of those childrens birthday party ideas that is best for a pirate party. We had them go on a treasure hunt to find a treasure box filled with gold bags with goodies inside to take home (coins, gum, compass, etc.)

They then got back on the pirate boat and took a ride back to the parents who were waiting. Another thing they did was ‘walk the plank’ to get off over a stuffed alligator. 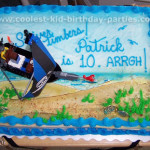