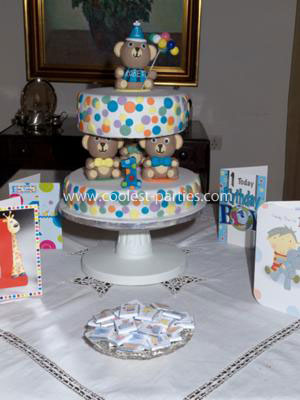 When my son’s 1st Birthday was approaching I started to think about how I was going to celebrate this important event and the first thing that popped into my head was of course a big party.

I wanted to choose a theme for the party. It was too soon for a cartoons character theme because he was too young and he didn’t have a favourite character as yet. Then I thought what is the most popular character associated with babies, which represents cuteness and cuddliness? But of course its the Teddy Bear! And so I did a 1st Birthday Teddy Bear Party. First of all the invites had a picture of my son Robert on them on one side and the writing on the other. The invites started with the words ‘Our little bear is turning one’ and in the background they had a Teddy Bear’s silhouette as well.

I made sure that all the balloons, banners and other house decorations had Teddy Bears on them. Even the music that played during the party had a Teddy Bear theme, for example: ‘Let me be your Teddy Bear’, Three little bears’, etc.

Here in Malta we have a very old tradition related to 1st Birthdays which is called ‘Quccija’. Basically we put some objects on a tray and let the child crawl up to the tray and pick one of the objects. Tradition holds that the object picked up will be related to his/her future career. For example if he picks up a thermometer he will become a doctor, a rosary beads is for a priest and so on. Of course its just an old tradition but its sweet. My son grasped a pen so he will become a writer!!.

Back to the party and more specifically the cake. I did 2 round pure almond cakes one slightly bigger than the other. I covered them both with white fondant and placed a lot of different coloured fondant polka dots all over their sides.

In the centre of the largest cake I’ve inserted 3 pillars and in each pillar I’ve inserted 2 plastic balls which I had previously covered with brown fondant and decorated them to create 3 cute Teddy Bears. When I placed the other cake on top of the pillars it really seemed as if the Teddy Bears are holding the cake on their heads. On the very top I did another Teddy Bear wearing a football T-shirt with my son’s name on the back and wearing also a party hat with a number 1 on it. This bear was holding a bunch of colourful balloons.

I have also ordered some chocolate mints with Teddy Bears on their wrapping paper and a message on them that said ‘Thanks for coming to my party’.

Last but not least I wanted my guests to have a keepsake of the party and so I gave them a Teddy Bear soft toy wearing a t-shirt with a photo of my son on it. They were really impressed and the party was a big success. I am sure I could have done more but i didn’t want to spend a fortune. All in all I think that with the budget I had I did a very nice party for all my geasts but most important for my son.