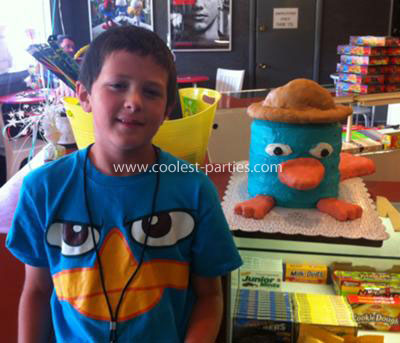 My 4 sons always get to pick their birthday cake and theme. They come up with some really cool ideas and I help them to become reality the best I can. This year my 8 (soon to be 9) yr old son wanted a Perry the Platypus cake from Phineas and Ferb for his 9th birthday. After we searched around on the internet for ideas, we realized that we were going to have to come up with our own. So he decided that he wanted Perry to be sitting, not lying down like a lot of the cakes we saw. This is what we came up with.

I baked 5 round cake layers that were 8 in. each. We used both chocolate and vanilla because that is what my son wanted. It took 1 chocolate and 1 vanilla cake mix. The cakes were stacked with a butter cream frosting layer in between each cake. Then I used butter cream frosting tinted with Teal to make Perry. I smoothed him out with a Viva paper towel as best I could.

The feet, tail, beak and hat were all sculpted out of crispy cereal treats and left to dry for about 4 hrs. We just free handed these items from a picture we had of Perry.

I made a marshmallow fondant and tinted it with a little bit of copper for the feet, tail and beak. The fondant was rolled out and placed over the cereal treat shapes. I used brown for the hat and colored the fondant for the hat. Then rolled it out and laid it over the hat. The eyes were just butter cream frosting that I tinted black for the iris of the eye.

The beak was tricky to put on. I held it in place by 2 bamboo skewers stuck into the beak and then into the cake. I did not put the beak on until we started the party just in case it was too heavy but it held on nicely.

The party was held at our local movie theater and the kids watched Phineas and Ferb cartoons. The decorations, table covers, party bags and balloons were all themed to Phineas and Ferb right down to his invitations.

This Perry the Platypus Cake was fun to make and my son and all his friends loved it. I did have a few parents ask me to make cakes for their children’s upcoming birthday parties. 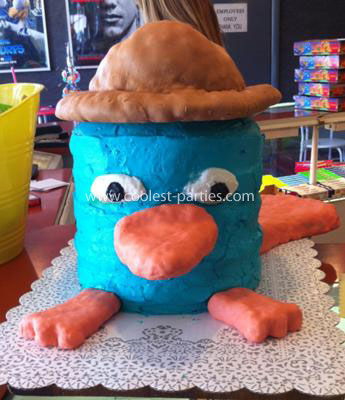