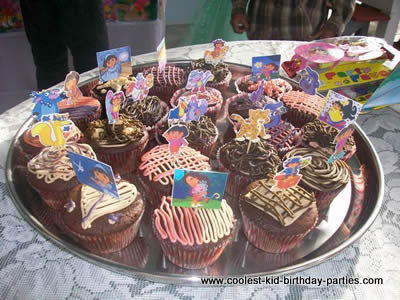 My two girls (turning 2 and 4) are CRAZY about Dora so it was no contest as to what the theme of the party would be. We got Dora invitations and all the party supplies with Dora on them – goodie bags, tablecloths, cups, saucers, stickers, flag banners, a few Dora foil balloons (which we never got to use as they were not properly secured while we were setting up and they floated away unnoticed).

I am not ashamed to say we bought the cheap Chinese imitation stuff since these came up to quite a bit and had I bought the original merchandise, I would have had to cancel the party altogether. After this, I couldn’t afford cupcake toppers so I used the Google image search and got all these great pics of Dora and her gang and I used Corel and imported the images and then made a mirror of each one and printed them. I then cut them out and glued them together with a cocktail stick in between (or you can use toothpicks). These can easily be inserted into regular cupcakes (see pic).

My girls always love being princesses so we dressed them up as princesses instead of Dora outfits. I made two cakes cause I did not want to hear mommy where is my cake but only one was a Dora cake. I got the picture from another mom on this same site and printed it out but I made it all with icing (she did it with chocolate ganache).

We did the usual games such as musical chairs but the best part was the ‘adventure’. I told the kids to come along and we would go whack the pinata. But when we got to the place where the pinata was, there was Swiper the fox – a stuffed Swiper that belongs to the girls. And I said “oh no, where’s the pinata? What happened to it?” and of course they all know what Swiper does so they knew that he took it. So then I asked them who to ask for help if we don’t know which way to go and they said map. So we called Map who was hanging down from the swing nearby.

I used nickjr.com’s super map cutouts and I had a frame from an actual episode (I had to pause it and take a pic with my camera to get this and then superimposed a mountain over the last spot which was Dora’s house to get the route I wanted) which depicted where we were to go and it was an actual Map. So they opened Map and saw they were to go through the jungle (a tree surrounded by lots of ferns and other plants), over the river (two huge cardboard boxes which I opened flat and covered with blue gift tissue paper), and up the highest mountain (the front stairs) which is where Swiper had thrown the pinata. They had to collect stars along the way (which I had also taken pics of from actual episodes since I did not find these on Google images) and I stapled them onto curling ribbon and tied them on the leaves of the plants. There were two paths but one had tigers on it (a pic of some tigers).

When they got through the jungle, there were snakes in the river and there were stepping stones across the river. We eventually recovered the pinata – I had filled a huge box with all kinds of sweets and snacks, little gifts and stickers and pencils and some confetti. I sealed it and turned it on the side and I cut a large hole in the bottom. Then I cut another piece of a slightly softer cardboard that was a little bigger and settled it over the hole to cover it. I tied long pieces of different colored ribbon over and around the piece of cardboard so that the cardboard would come right out of the hole when the kids pulled. Then I got purple crepe paper and covered the box, made a star pocket and another little side pocket for map and a top flap and printed out a large mouth and eyes and made a Backpack pinata. I put two holes in the sides near the top to pass a rope through to hang it. They pulled and the kids had a blast.

I provided extra bags for them to put their stuff in. Then each person who had a star (there were enough for each kid to get at least one) got a prize. I used to snakes and some other little gifts as prizes. I wrapped each gift so there was the added bonus of receiving and opening a little gift for each kid.

Then we cut the cakes and lit some sparklers and then we served food. It was quite great. The only disappointment was that my two photographers (my brother and a cousin) each had a camera and each took only half the pictures and they each took of the same events, so I have no pics of the actual adventure except for the climbing the mountain, or of the pinata scramble. 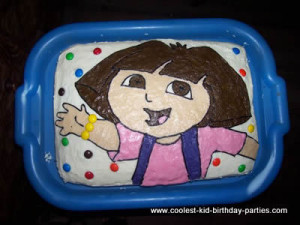 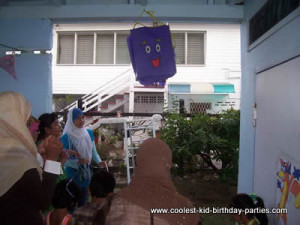 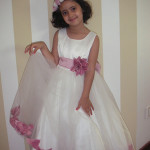 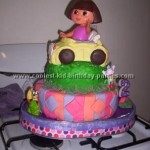