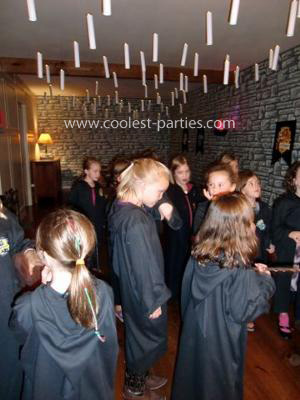 We did a Harry Potter party for my daughter Bridget’s 6th Birthday. She is a huge fan of the Harry Potter books and movies.

The invitations were acceptance letters to Hogwarts School of Magic and Wizardry. We used the Hogwarts Wizard font found on-line at http://www.the-leaky-cauldron.org We customized each invitations with the guest’s name to make it look like the letter Harry received at the start of The Sorcerer’s Stone.

Here was the text we used for the invitation for our daughter:

We are pleased to inform you that you have been accepted into the Hogwarts School of Magic and Wizardry to celebrate the birthday of Bridget Quinn on September 18th, 2010 from 6-8pm. You will be able to gather your school supplies when you arrive. Classes will include Introductory Potions, Defense Against the Dark Arts, Care of Magical Creatures, and Quidditch 101.

Please take the Hogwarts Express to Hogwarts Academy currently disguised as the Muggle home at 123 Our Road. There you will find a magical door only visible to Hogwart’s students and family. If you would like to attend advanced classes you are invited to spend the night. A sleeping bag is required for the advanced curriculum.

Please respond by Owl to xxxxxx@pol.net or by Muggle telephone at xxx-xxxx to confirm your attendance. We look forward to your arrival at Hogwarts.

Please be advised that only the most nutritious candy and sugar filled treats will be served. On-site medical care will also be provided but we cannot be held responsible for mistakes with transfiguration or uncontrolled levitation. Parents are reminded that first year students are not allowed their own broomsticks. The children arrived at Platform 9 ¾ . We used corrugated paper that looked like a brick wall and hung it across the hallway. The children had to run through the wall to get into the party. We also painted an authentic looking sign for the platform.

Once all the children arrived they were introduced to Professor Quinn who would be leading them to Diagon Alley to get all the school supplies that were needed for their classes. This was my husband dressed in a wizard costume.

Diagon Alley was set up with several stores in our living room. We used wood frames covered with corrugated brick paper for the walls of the stores. All the signs for the stores were made with posterboard and wood frames.

The new students were first led to Gringotts Bank and they all received a bag of gold coins so they could purchase their supplies. Then they were sent to Madame Malkins Robe Emporium to get their robes.

I had sewn a black robe for each child and they were set up in the shop on bar with hangers. After each child had chosen and put on a robe, they were then lead past the Owlery. We had several cages with stuffed owls in them set up in this shop.

Finally, they were lead to Ollivander’s Wand Shop. There they were told about how the wand chooses the wizard and they had to reach into a bag and the number they pulled out was the wand that was chosen for them. On the shelves were boxes filled with wands.

The wands were made of rolled paper and hot glue and then painted to look like wands with craft paint. The boxes are made from poster board covered in paper. Inside the box was foam covered with red material. We printed labels and attached them to the lids and also numbers were put on the sides of the boxes which corresponded to the numbers chosen by the children.

Instructions for making the wands can be found at: http://www.dadcando.com/

It was then time to go to the Great Hall at Hogwarts. Hogwarts walls were decorated with paper that looked like stone that was purchased online. There were banners with the four Hogwart’s house crests on the wall. I had hand painted the crests with acrylic paints and attached the crest to a felt banner. Hanging from the ceiling were 100 lit candles that appeared to be floating. These were done by using battery operated tea lights inside a paper tube and then suspended with pins and monofilament from the ceiling.

The “students” were “sorted” into one of the 4 houses – Griffindor, Ravenclaw, Slitheren, or Hufflepuff. Each child had the sorting hat placed on her head. Inside the hat was a 2-way radio and my husband in the other room randomly announced one of the house names which broadcast from the hat. Each child received a badge of the house crest to place on their robe. These were laminated paper crests that we printed and attached a pin to the back.

The houses were the teams for the games.

First they played Quidditch. My husband made 3 different-sized hoops on stands. Each team of girls had a chance to throw balls through the hoops, smaller hoops were a higher point value. The team with the highest sore received a point.

The next class was Defense Against the Dark Arts. For this class each team had to catch as many dementors as they could in 30 seconds. The dementors were black balloons with black streamers attached. Two large trash bags were filled with the balloons and the balloons were strewn on the floor and they had to quickly collect them and put them in a bag. This was supposed to also be done with a fog machine but we forgot to put in one but no one noticed, they were having so much fun. The team with the most dementors in the bag received a point.

The next class was Care of Magical Creatures. For this class we played pin the feather on the Phoenix. This is played like pin the tail on the donkey but we used a picture of a phoenix and red feathers. The team with the feather closest to the designated spot received a team point.

The last class was Magical Potions. A table was set up with various bottles, jars, and a bubbling cauldron. I used differed colors of gatorade in decorative bottles and labeled them with names such as Life Renewal potion, Frog Juice, and Dragon Tears. The girls could add different ingredients such as lava rocks which were Kool Aid fizzing drink tablets. We also had gummy worms, fish eyes ( small white candies), spider legs(chocolate sprinkles), toad slime (green karo syrup), powdered unicorn horn (tan colored sugar). The girls loved this activity and each team got 2 turns making potions. All the ingredients were edible so they got to drink their concoctions.

After cake and ice cream the girls went to “Honeydukes” to spend the rest of their coins. The winning house (team) got to shop first. Honeydukes was a shelf with a collection of jars with various candies to fill their goody bag. There were jars of gummy slugs, sour worms, and, of course, chocolate frogs.

All the girls had a wonderful time and they still play with the Hogwarts costumes and wands. 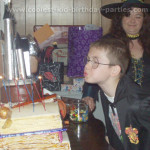