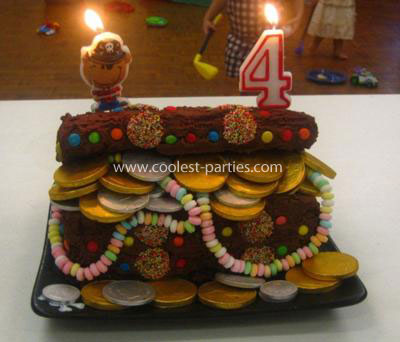 Master Jack was turning four, I was thinking of a theme for his party. it was just after Christmas, so the shops had Christmas items on sale. I saw some gold coins and thought “Ahoy there me hearty!” 8) I can make a treasure chest. And we can have a pirate theme.

It was easy to find pirate themed party items, they seem to be everywhere.

We had banners and bunting with pirates and skull and cross bones. Loot bags, even the loot in the bags were all pirate themed.

We had a game where the children wore a blind fold. Then they had to stick a treasure chest on a map with a cross on it. the person who got closest to the cross was the winner. Because the children were all young, they all got a pirate prize 8). We had a basket full of dressing up pirate clothes.

I had another cool idea to use Jack’s plastic pirate sword to look like he was cutting the cake, (for photos).

We were going to have the party at our local park. Because of heavy rain we booked the local hall instead. It was great fun 8)

I made this Homemade Treasure Chest Birthday Cake Idea for my 4 year old son. I baked a rectangle shape and a square shaped chocolate cake, then I cut them to make 3 rectangles the same size. I used one of the off cuts to make a wedge. After sticking 2 of the rectangles together with chocolate butter icing, I stuck the wedge on top around half way.

Then I iced over that and placed the 3rd rectangle on top to make the lid. After icing the whole cake, I used a fork to try and make a wood pattern. Then I used gold and silver coins that can be brought around Christmas time, mini M&M’s, and candy necklaces to look like the treasure.

The kids loved this cake, the coins were a big hit. 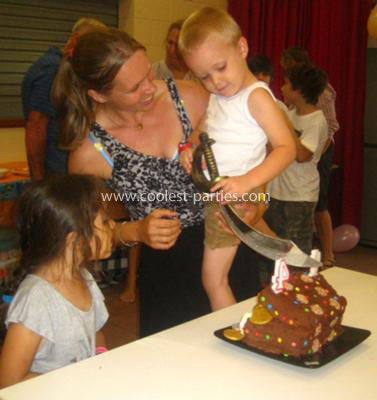 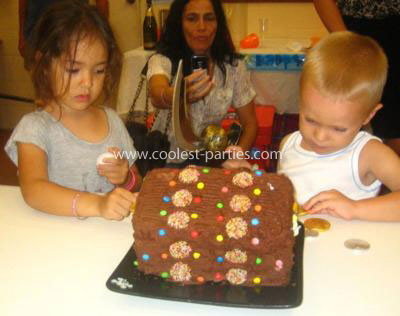