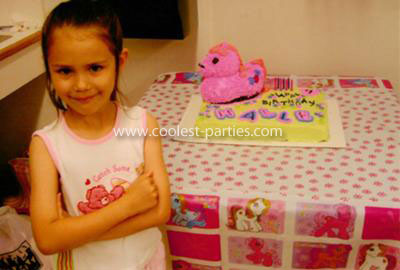 For my daughter’s seventh birthday, she was very big into My Little Pony. Not only did she have every one available at that time, which has now been five years, but she also had all of mine from the eighties!

To plan her party, we decided on a crafting pony themed party at a local arts and crafts store. The plates, napkins, and cups were all bought and already had the My little Pony theme onto then. We chose pink and purple as the main colors. The invitations were handmade, I drew out a pink pony on the bottom right corner of a piece of paper, and created pink and purple flowers and green vines crawling up the sides. We announced her party info in the middle and reprinted them using light pink paper. We also covered the tables in store bought My Little Pony cloths.

For the cake, I wanted it to be extra special. I decided that I actually wanted a 3D pony on the cake itself. I baked an 11 X 14 sheet cake, using our favorite, butter recipe golden, and iced in a lime green. Then I baked the pony, a Wilton 3D duck pan. I traced out the bottom adn tried to remove some of the base cake to support the pony. I used icing to try and make the duck features appear more pony like. I piped pink stars using Wilton tip #16 across most of the pony. I used red for the mane, black for the eyes and nostrils, and red and purple for the pony’s balloons. We also had balloon in red , pink, and purple through out the party room. I used Wilton cookie cutters in the letters of my daughter’s name and a heart. I barely touched them onto the cake, the removed them, leaving the outline behind. I traced her name in black inside the letters, then starred around the black with pink and purple. I starred the heart pink and piped the number 7 in black. I also added pink and purple flowers with vines all around.

The party goers painted overnight bags, and had pony, flower, heart, and star stamps available to use. Inside each bag we added in girly trinkets such as hair accessories, brushes, sparkly pencils, and stickers. Unfortunately Hurricane Katrina destroyed a lot of our photo’s, but I found two. We did have a mishap, the pony tipped on the way to the party, so fingerprints are somewhat visible on the pony.

I hope this is helpful. 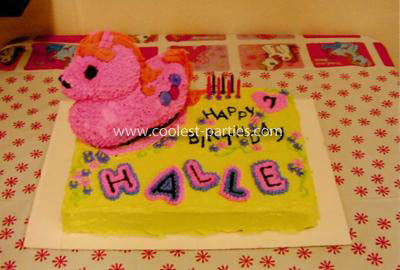 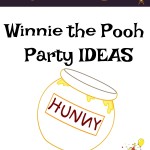 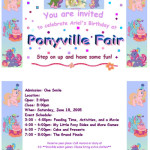