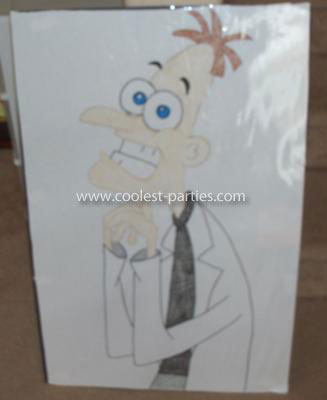 My oldest child just turned eight in May and we had a Phineas and Ferb birthday party to celebrate.

As our party guests arrived, we had the Phineas and Ferb soundtrack playing and played Freeze Dance. That is where you let everybody dance and then you turn the music off unexpectedly and everyone has to freeze. Those who don’t freeze are out until you eliminate all players but one.

Phineas and Ferb Games and Activities

They could also use additional supplies that we had there—more toilet paper rolls, more egg cartons, any crayons, paper and scissors that we had available. This is because Phineas and Ferb are such great creators. At the end of the contest, we let each team show their creation and talk about it. I made platypus tails out of orange construction paper, one per child. We did the whole blindfold and spin them around thing.

After pinning the tail on Perry, we did a scavenger hunt which was set up during the time the kids were making their creations. The scavenger hunt was to find Perry the Platypus because Dr. Doofenschmirtz had taken him. We had a poster of Doofernschmirtz that I had drawn, also using one my son’s many Phineas and Ferb books. I laminated the poster and adhered it to a hard poster board. We have a stuffed Perry the Platypus toy which we used as the kidnapped Perry. The kids went on a scavenger hunt, following clues that ranged from the kitchen to the bathroom, upstairs and downstairs, the garage, and outside. When they found Perry at the park with the Doofenschmirtz poster, we had our next activity.

The kids each had four attempts to throw a water balloon at Dr. Doofenschmirtz, the poster over at the park. We don’t have a backyard, so that’s why we went to the park right by our house. You could do this in the backyard. We set up red X’s on the Doofenschmirtz poster for the kids to hit.

After those games, it was time for lunch, as we had a lunch party with pizza and root beer. Then we brought out the Phineas and Ferb cake and did candles and after cake and ice cream, we did presents. We spent the rest of the time until parents picked up their kids playing Freeze Dance.

One of the parents later contacted me and told me that her child had said it was the most fun he’d ever had at a birthday party!