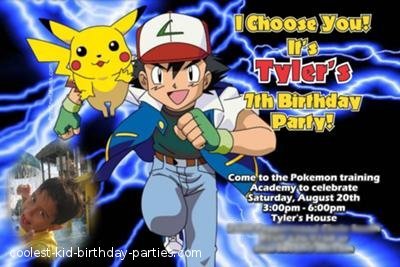 My son is a HUGE Pokemon fan and wanted a Pokemon party at our house for his 7th birthday. As his birthday is in August and it is sooo hot, we decided to make a pool party.

First off, I want to say that I found a lot of ideas from this site and others. Thanks!
I combined what I thought would work for us for his party.

I ordered personalized photo invites off of eBay with my son’s picture uploaded into the invite. Next I went on tradingcardmaker.net and designed a Pokemon training card with my son as the trainer.

Since I know nothing about Pokemon, I don’t know how accurate it is, but I had him “evolving from 6 to 7” (as he was turning 7). I Then I put “I battled at Tyler’s Birthday Party and the date.” I used contact paper from the dollar store to laminate one of the cards for each boy attending the party.
I then strung the cards so each boy could hang one around his neck.

I also made a card that said “thank you for coming to my party” and printed these out on labels to use for goody bags. I used bags from the dollar store.

I took round labels from the dollar store and downloaded 8 Pokemon badge pictures and printed them on the labels. Each label represented a battle they had to complete. When they did, they got the label to put on their card.

The first label was the Basic badge and they got this one when they got their card.

The second one was the Insect Badge. I found containers of Gummy Bugs at the dollar store and told each boy they would have to eat an insect to get their Insect badge. They then had to eat a gummy bug.

The third badge was the Legend Badge. I had a bunch of Pokemon cards in a jar and they had to guess how many were in the jar to get this badge. The boy who guessed the closest got to keep all the cards. I bought 300 cards on eBay for $20 and used these for the goody bags and this game. The boys did these first three badges while they waited for everyone to get there.

Once everyone arrived, we moved outside. Badge #4 was the Trio Badge. I found 100 small plastic Pokemon figures on eBay for $15. I hid these all over the patio. When the boys found 3 of them, they came to me to get their trio badge. They then also got their goody bags so they could put their Pokemon in them. They couldn’t look for more until every boy had at found 3. I kept their bags on the counter outside for them.

Badge #5 was the Quake badge. I did the balloon pop game for this one. I found 10 packs of Pokemon stickers at the dollar store. I blew up 50 balloons and put a sticker in 20 of them (the number of boys at the party). The boys then had to stomp on balloons to pop them until they found a sticker. They then brought it to me and I gave them their badge and put the sticker in their goody bag.

Badge #6 was the Freeze badge and they played freeze tag in the yard and then swimming in the pool. I collected their trainer cards as they went in the pool and put them in their goody bags.

Badge #7 was the Jet Badge and they had to go down the pool slide to get it.
I then had them dry off and come in the house for pizza.

To get them to stay at the table, I had Badge #8, Bolt. I found a Pokemon Bingo game for $10 and they had to sit at the table and play Bingo while they ate. The prizes were Pokemon cards and stickers, which then went in their goody bags.

I found a personalized cake topper and ordered the cheapest cake from the grocery store.

I put the cake topper on it and decorated around it. I coordinated pickup time right when we would finish cake. My son and his friends loved the party. He wants it again for his 8th birthday! 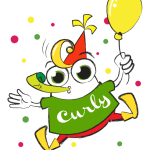