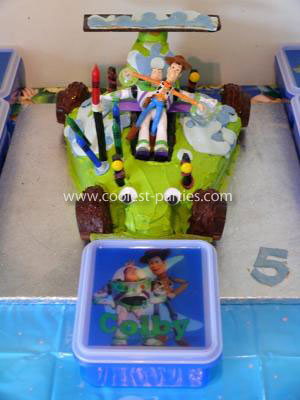 Colby has loved Toy Story since the day he could walk and so when he asked for a Toy Story Party for his 5th birthday I wasn’t surprised. However, I was so pleased that Toy Story 3 was coming out in South Africa a month after his party so all the kids would be aware of it.

When I started planning the party I wanted it to be interactive and fun from start to finish. So with Pizza being Colby’s favourite food I thought a “Pizza Planet” area would work. Once all the children had arrived we brought out all the tables and little pizza bases. They were going to all make their very own pizza’s at Colby’s Pizza Planet. They each got a pizza base and 4 small bowls with Tomato base, cheese, ham and pineapple; I gave them a play dough knife and they had to make their own pizza’s. Once they were done, we popped them into the oven and 10 minutes later everyone was eating their own pizza from Colby’s Pizza Planet.

Once the pizzas were done and everyone had run off their food outside in the garden. We played “Pin the nose on Mr Potato Head”. With the help of a very talented friend, I had an A1 poster made of Mr Potato Head without a nose. I then printed a nose for every child with their name written on it and we blindfolded them so see who could pin Mr Potato Head’s nose on the right spot. The winner won a bag of sweets to share with all his friends at the party. (I am not one to give one child a prize).

We then played “Musical Toys” which is like Musical Chairs except the children sat next to a Toy and not on a chair. This is always a treat in my family as we love music and each child that never found a toy has to sit out till there is a winner. And once again – the winner won a bag of Toy Story pencils to hand out to all his friends. Colby’s cake was made with lots of love and was enjoyed by everyone at his party. The party packs were boxes with a sticker on the top with their name on it.

I love my children’s parties and every year they choose what theme they would like, about 2 months before the party and we sit down as a family and plan the rest from there. Hope you enjoyed Colby’s 5th Birthday party as much as we did and that you get some wonderful ideas for your beautiful child’s next birthday.

Birthday Traditions from Around the World