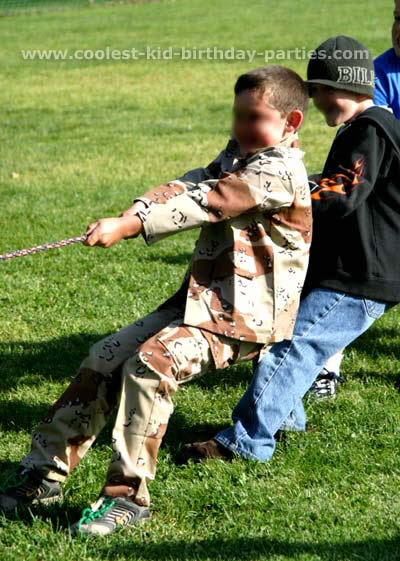 Kids party ideas and photos by: Debbie from California

There are so many cool kids party ideas for an army theme. Here is what we came up with for invitations:

We wrote our invitations in Army slang – “Attention Marine Recruits! You are invited to Cody’s OOH-Rah 8th Marine Corps Boot Camp Birthday Party. If you decide to attend, your presence is requested at 1600 hours at the neighborhood park. Please wear appropriate attire, as a few good men do! You will be motivated and challenged to complete your boot camp training during this social function…so arrive mentally and physically prepared to have an Ooh-Rah good time! Please RSVP to the Party Commander at 111-9999, by Thursday 1300 hours. Semper Fi!”

The day of the party, after all of the young recruits arrived, they attended their flight training indoctrination class where they assembled and decorated their aircraft (paper airplanes with stickers).

After initial flight training was completed, it was off to do “Carrier Quals”. The student pilots stood in formation, waiting their turn to land on the Navy Carrier (USS PICNIC TABLE). Their approach was from 10 feet out to sea, whereby they had to launch and fly (throw) their aircraft, trying to land closest to the “x” aircraft parking spot, without hitting the control tower (box on picnic table). The student pilots who most closely landed by the “x” after 3 landings, were awarded their wings (real military squadron patches purchased from military surplus store.)

On to Basic Training Boot Camp! Each recruit was quickly briefed as the Drill Sergeant (my hubby-a real life Marine) explained and demonstrated how to successfully complete the Boot Camp Obstacle Course. They ran up and down stairs, performed drop and rolls, low crawls, ran “tires” (chalk drawn circles), ran though the maze (path through picnic tables), and carried heavy backpacks for 100 yards (packs filled with rocks) to reach the finish line. After they completed the obstacle course each recruit graduated Basic Training and received their “Stripes” (real military stripes from military surplus store).

Just like in real military life, after completing Basic Training, they were shipped off to War – “Tug of War” that is! Teams were selected and many “battles” were won and lost.

Following the “War”, the young soldiers were sent to the Tank Battalion, where they donned their Marine Combat Helmets (Snowboard helmets covered in Camouflage plastic). Climbing into their Armored Tanks (Cardboard boxes painted “Camouflage” with spray paint, complete with a huge cannon made from a black painted gift paper roll and two Big Guns which were Nerf shooters), they then took aim and shot at an enemy tank (remote control toy tank) and at bull’s-eye targets. The two soldiers who were determined to be “Expert” shooters (had the most accurate shots-kept track of points) were awarded Marine Corps patches (from military surplus store).

After working so hard through these greulling kids party ideas, it was finally “Chow time”! Each soldier was given pizza and lemonade rations to enjoy. Rumble, vroom, rumble…. then came the Tank Cake! The Tank Cake was a huge hit. The cake was made from one rectangle cake pan and a Wilton Car Cake Pan. I placed the “ground” (rectangle cake) down first, then positioned the “tank” off one edge of the “ground”, so it looked as though it were climbing up an incline. I cut the “tank” from the Car Shape by cutting a sharp perpendicular triangle from both the sloping front and back windshield. I used homemade frosting; creating a tan, light brown, muddy green, and green. It was applied “blotchy” so as to look like camouflage. Details were done with black frosting using a decorative tip. Wheels were Ding Dongs…and were a “hot item” with the boys. 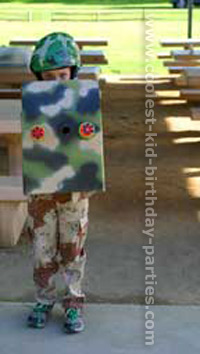 A small piece of advice: make sure you have an equal number of Ding Dongs for each child. I lucked out unintentionally because I could cut them in half and had just enough for each boy. I put 3 on each side, but if I made the cake again, I would put at least 4 on each side. The “tracks” were individual sections of Hershey Chocolate bars broken apart. They were adhered with frosting onto the Ding Dongs on the sides and under the wheels, and then to the graham crackers at the top of the wheels. The graham crackers (cinnamon) sections made up the wheel track covers. The ground was frosted muddy green and covered with crumbled graham cracker crumbs to depict sandy dirt. Lights were yellow M&M’s. I had some small Marine men toys and sandbags that I added for embellishments. The boys especially loved “the Big Gun” which was an evergreen Taper Candle. 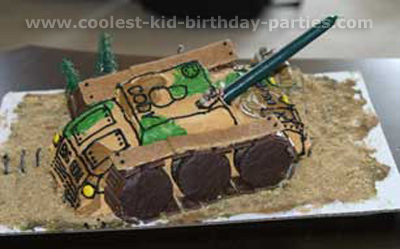 When it was lit…wow! Looked really cool! The boys gathered around with eyes huge with amazement, big smiles on their face while licking their lips. They grunted “Happy Birthday”, then dug right in! 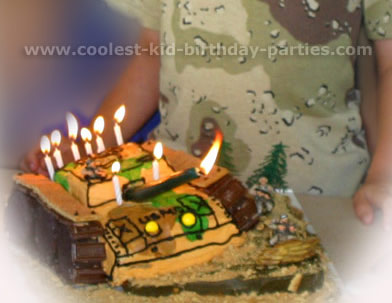 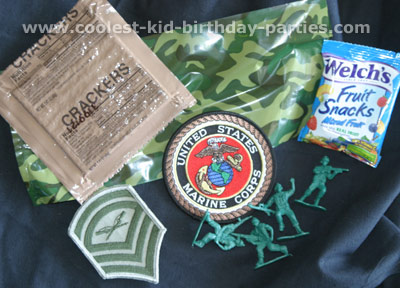 Our kids party ideas for Thank you cards were handmade with the front flap of the card showing a picture of a tank pointed directly at you stating, “You were Right on Target”. The inside stated, “Your gift was Dynamite!” and showed sticks of dynamite. All in all, a great birthday party – lots of happy little Recruits and one very Happy 8 year old! I hope you enjoyed my kids party ideas! 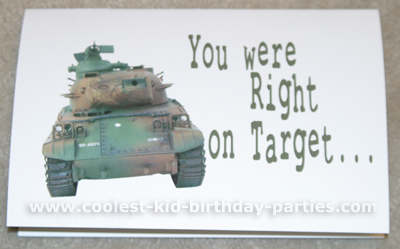 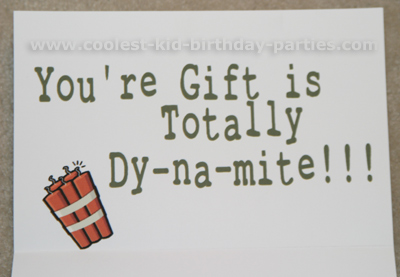 Thanks for all the great kids party ideas on this site!