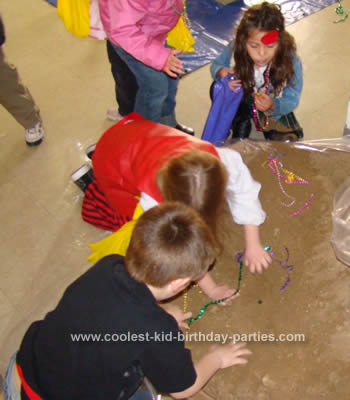 The invitations for the Pirate theme birthday were one of the coolest parts. I printed a picture of a treasure chest then printed my wording on a scroll. I couldn’t use a real scroll because the kids got them at school and they have a folder to bring their things home in. It was a flat invite but you pulled a little ship anchor down then the party info was printed on the scroll kids love to pull so I made a tab so it would catch on the inside and not come out. The back was covered with basic black construction paper. I also attached a magnet to the back so parents can put it on the fridge to remind them.

Decorations for the Pirate theme birthday were simple orange and black balloons with one Mylar attached to a gold treasure chest at the bottom for the weight. I took rocks, put them in a baggie and then covered it with tin foil; pre cut a hole in the chest and had a pipe cleaner to attach balloons to the weight. The ribbon came through the top of the chest which was partially open. I only needed about five necklaces and a few gold coins and rings to finish it off. Children arrived and decorated chest and flags. My daughter who is six pre painted the chest and then printed out various pirate style clipart and pictures. They all hung out after and begged to play all the games.

We split 30 kids in two; half went to jumper other to the games.

First was walk the plank, they were spun around then had to walk the plank. There was bubble wrap under the tarp with crocs and gators popping up. I used apple trays from the Acton market, flipped them upside down (it looked like waves), cut one hole in each tray, pushed paper towel rolls up and cut a slit in the top of the towel roll to slide the croc and alligators on easily. I used a piece of cardboard to help the towel rolls to not go through the hole in the tray. We just enlarged a picture from online for the croc and alligators and simply colored them. When the kids fell they heard the popping bubble wrap. Once they got across they got their sashes.

The sword duel was an alternate Pirate theme birthday game.

Then the cannon ball toss. In my 9 foot cardboard and paper mache pirate ship I cut port holes, two on the actual ship part and one bonus hole in the captain’s cabin. They then got three tries then received their eye patches.

Next was swabbing the poop deck with two mops. Kids had a relay race around the barrels I decorated. They were large pretzel containers. I paper mache’d brown construction paper on it and two black rings. It took five minutes. They got their hats.

Then the treasure digs. The coins were color coded with stars stickers that coincided with prizes, 20 coins, 6 big and 14 smaller. I made candy bunches, the small were small lollis and a cry baby, the big were a pencil a big lolli and a cry baby. Then we switched.

Lunch was pizza and caffine free soda. Pirate theme birthday cake followed and then we opened presents then goodie bags had pirates of the Caribbean pencils and crayons, skeleton lollipop, and a suction cup toothbrush. Then we did the piñata. I just used a simple box, added a piece of cardboard to make the lid arched at the top then paper mache’d the whole thing. Then my daughter chose the colors of tissue paper. I cut them into strips and fringed each strip. The gluing the tissue was hard but once we got it down it was easy. The trick is to have a glue bottle with a tip, don’t use a brush. My only issue was by the time the 27th child hit it, one hit it over the top and it fell before it broke so the kids just beat it. They loved that more!

We had a cannon ball pop, where papers were put inside with candy or prize then kids had to sit on them and pop them.

Captain Aundreas dirty sock pick up. I had two barrels and two hooks then it was a relay. Socks were on the floor then they had to run, pick them up with hook then put it in the barrel. It was so funny because they really had to use the hook because they were “really dirty” (I just used old stained work socks).

The kids had free play on the jumper. The jumper was a combo jumper, it had a basketball court, obstacle course, and a slide.

I had a game table set up for some older kids that were there. Some metals puzzles the ones you have to get a piece off it and it seems impossible and I got the game from the movie, the one with the cups and the die.

I had baby puzzles for the babies and sticker and coloring books for all the others. On that table there were skulls that I had bought from Rite Aid that had toys inside. Those turned out to be my daughter’s favorite toy before the party. I have great pictures.

You just HAVE to see the pics along with the 9 foot, paper mache pirate ship. This was for the kids to play in with a moving wheel and a captain’s cabin. I also built a palm tree with an island for the treasure dig game. It had real dirt and it was easy to clean up. For my daughters presents I made an extra long treasure chest. If anyone wants to buy the pirate ship or island feel free to contact me at Loveclassiccars@hotmail.com I just can’t throw my 2 month project out. I have gotten lots of pirate theme birthday ideas thanks to the website. 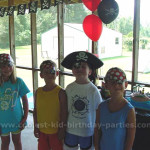