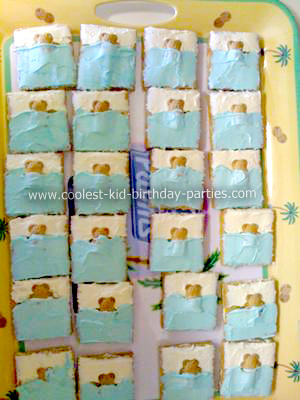 My daughter wanted a Puppy Dog party for her 5th birthday. She also loves movies so I expanded. We had the party on a Saturday evening at 5pm knowing that the first hour and a half was going to be party events and the last hour and a half we’d be watching movies. We had a very limited budget so I tried to get creative.

Invitations: I made the party invites with cardstock and felt. The felt represented a blanket. I glued the cardstock to the felt after printing and folding it. The cover had a sleeping puppy on it with the party details inside. I didn’t want to use envelopes so I found some of the sticky stuff you see all over the junk you get in the mail. It worked great because it sticks and re-sticks.

Food: We started the evening with a light dinner of PB&J, chips and juice boxes. Most of the kids were too excited to sit and eat.

Games/Activities: I really wanted to keep the kids occupied so we had quite a bit scheduled. I put together an agenda for myself to make sure we stays on schedule.

We started with ‘Toss the Bed Bug’. I made bed bug bean bags with some leftover fabric, beans, and ribbon. The ribbon was the legs and I glued googly eyes on them. The kids tossed the bugs into my daughter’s baby doll crib. As they got all the bugs into the bed they were able to pick a pet to adopt. I found beanie baby size animals in the dollar section of Target.

The kids then took their animals through a series of stations to complete their adoption. The stations include a vet check, a grooming stop and finally they filled out their adoption card. Little brother got to use his doctor dress up to be the vet to sign off on a clean bill of health.

The grooming station was equipped with brushes and a play blow dryer. Then the kids got to pick a ribbon to put on the pets neck. The adoption certificates I made with cardstock on the computer. They were half page size. The kids wrote in their name, the type of animal they adopted and the pet’s name. Then I stamped it with a large paw print.

Next they played a hot potato game. The potato was a pair of new slippers the winner got to keep. As the kids were eliminated from the game they were directed to pick out a bed for their pet. They took their bed to the tables to decorate it with markers and stickers. I made the beds out of kid size shoe boxes. Most shoe stores will give you empty shoe boxes. I wrapped the box in white paper. Then I used different colored felt to line the bottom of the box. I cut small squares to glue together and stuffed to make a pillow.

Cake: I tried to make a dog bone shaped cake but I couldn’t get the mold I had to work. So I made cupcakes instead. I arranged them into a square with most of them blue with one row of white at an end. Then I used a toy dog at the top to make it look like the dog was in a bed.

Party favor: They obviously got to take home their pet and bed. I also made graham cracker cookies. I used two squares of cracker and sandwiched them with frosting. Then I put a strip of white frosting on the top to represent a pillow. I placed a Teddy Graham to lay on the pillow. Then put a layer of colored frosting over the cookie and bottom half of the bear to look like a blanket. I put them in a celo bag for the kids to take home.

Presents: My daughter has Down Syndrome and isn’t that great at ripping paper so I let the kids sit with her and help as they opened their gift. This also made is more special for the kids.

Finally: We watched one of my daughter’s favorite movies “Over the Hedge”. I had a bunch of small blankets laying out so the kids could cuddle up on the couches and chairs. I also had individual popcorn cups filled. I got the cardboard cups at a party store.

The kids had a blast and I wore them out enough that they all sat through at least an hour of the movie!