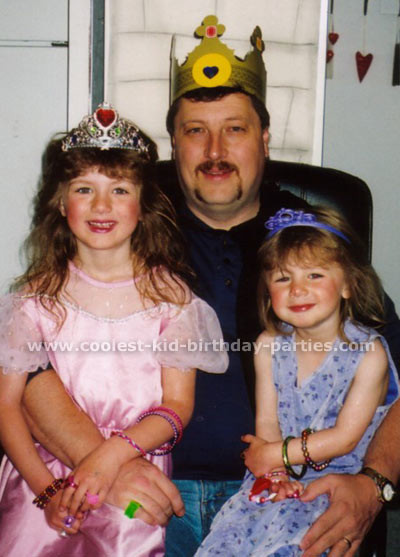 Out of all of the theme parties, this year Joey chose a knight theme for his 9th birthday. So, there were 8 knights, 2 princesses, and a king.

The invitations were printed on red paper with the edges burnt. It read as follows: “Hear Ye! Hear Ye! His Majesty wants to honor the bravest knight: Sir Joey of the house of G—ki, your presence is required at the celebration of the 9th year of his birth, at our castle Saturday April 30th 9:00am-1:00pm RSVP to King David or Queen Maureen @ (our phone number). It’ll be nothing short of a royal celebration!!”

In addition, a paper castle and its towers and silver swords, with a touch of red black and silver elsewhere, garnished the invitations.

The birthday guests arrived to a red carpet (plastic red table cloth) that lead into the castle; it was here that the king declared that each knight must design his shield so as to identify himself. The knights drew with great care making awesome shields. Then each shield was taped to the suit of armor (a black garbage bag that had head and arm holes). And then the knight was dressed – ready for battle. The king, with the help of princess Chiante, then dubbed each knight giving him a sword made of the finest cardboard and engraved with the shiniest aluminum foil. The knights were now ready for battle. The battle begins… it had come to the attention of the king that dragons were seen throughout the castle grounds and they were laying eggs (plastic Easter eggs). Each knight was to find the dragon eggs and bring them to the king at once (there were purple and green eggs filled with treats, as well as golden eggs…the golden ones were for the princesses…). Only the bravest of all knights would be able to find them. The knights searched the kingdom of theme parties until all the eggs were found. Then suddenly the queen announced that a coin from king’s royal treasury of golden (chocolate) coins and beautiful jewels had been stolen!!! The knights were sent at once to find the missing coin. They hunted and hunted; many clues later, finally one knight discovered the missing coin. The king rewarded him greatly with the whole treasury. He was pleased and asked that the queen guard over it so as to protect it from being stolen by one of his fellow knights ;). Once the coin was found the knights stayed outside in the cold and went to battle- swording one another- great fun was had!!!

Once back inside the honored knight received his gifts. Then on to the royal feast – a round table set with food galore. This included dragon eyes (jelly beans) and a special cake (a dairy queen ice cream cake with a knight on it- dressed in his armor and set off with a rich red trim). Finally, at 1pm the party ended and the knights left the land of knightly and returned to their own lands. A great time was had by all! And from the mouth of sir knight Joey- “this was the best party yet!!!” his delight makes my joy complete. I hope these ideas will serve as inspiration for your theme parties.