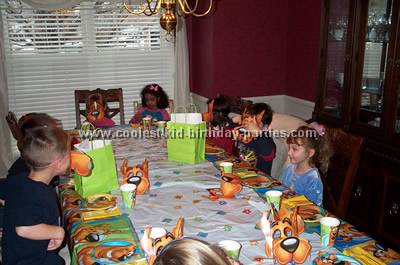 The invitations for The Scooby Doo birthday party were bought from a local party store. However, on the inside I wrote: “Come help us solve the mystery of the missing Scooby snacks!” The decorations were 70’s flower power cut outs (can be purchased at the party store), printed pictures of the gang from the web, aqua and lime green streamers and 70s-colored lime green and orange balloons were everywhere.

Guest arrived to the main party room which had 3 child-sized tables for kids to color pictures of Scooby and the gang. Once all the guest arrived I told the kids it was time to hear about the mystery of the missing Scooby snacks. The kids gathered around as I told the story of how poor old Scoob was so very hungry but when he went to his dog dish there weren’t any snacks. He looked in the fridge. He looked in the cupboard. Then he looked in the mystery van. But alas, there were no Scooby snacks. I told the kids that they were honorary mystery machine sleuths and had to help solve the mystery by looking for clues to lead them to snacks.

I gave each kid a lime green bag with their name on it to collect clues and snacks. The first clue was easy to find in the room and had an easy riddle for the kids to solve in which the answer was a lamp. So all the kids darted off around the house to find a lamp with snacks. Under the lamp were ghost lollipops (Tootsie roll lollipops with a tissue wrapped around them). And nearby the lamp another clue. There were 5 clues total since it was Ashley’s 5th birthday.

The snacks included the ghost lollipops, candy dog bones (edible for children, not dogs), Scooby Doo graham crackers, homemade chocolate Scooby’s (mold from Wilton) and homemade Scooby cookies (kit from Wilton). Since my little girl’s birthday is in January and it usually snows we did the hunt in the house. Once the kids found all the snacks I gathered them together and told them that while they were good clue finders they still needed to solve who stole Scooby’s snacks. So I had the kids “Fish” for more clues.

I set-up a blue sheet and a toy fishing pole where the kids had to fish for a clue. I hid behind the sheet and attached the clue. Each clue was a question about the Scooby Doo show and it was marked if it was a clue that was a “good” clue to solving the mystery or if it was just a question about the show. Each child got 2 fish turns – one good clue and one about the show. When they answered their show question they received a deck of Scooby Doo playing cards. The good clues were set-aside for the kids to figure out who hid the snacks.

However my little birthday girl ended up giving it away before the kids could answer the clues and said proudly “My mommy DID it!” even though that wasn’t the answer. I kept character and retorted “And I would have gotten away with it if it hadn’t been for you meddling kids!” Everyone laughed.

I then gathered the kids for the final task. Now that we found the missing snacks and solved the mystery there was only one thing left to do. The kids looked bewildered. I said we have to feed Scooby! Prior to the party I took a couple sheets of poster board and taped them together. Then I freehanded Scooby with his mouth wide open. He looked awesome; as good as Hannah Barbara drew him so many years ago. I cut a hole for the mouth for us to throw “snacks” (little lime green nerf balls I picked up at the toy store) at Scooby. Each kid got three tries to feed Scooby. And each kid won a “Scooby Doo 2: Monsters Unleashed” video. (Unfortunately one kid at the party already had the video but none of the other kids had the video.)

The Scooby Doo birthday party food had fit the theme, Scooby Doo Mac n cheese, a chocolate fondue fountain with Scooby Doo graham crackers, mini hot dogs and plenty of Scooby snacks – fruit veggies chips. In the dining room it was decked out with all the stuff from the party store.

3D Scooby Doo masks were at each place setting so that all the kids could be Scooby. [Side note: My child, whom I normally get my ideas and inspiration from announced “I have a great idea. How ’bout we all put on our masks and go hide and mommy has to say ‘Scooby Doo! Where are you?’ I nipped that in the bud. I did not want to have 12 little ones running around the house. But if you have a summer backyard party I could see a parent dress up in a sheet as a ghost and all the kids are Scooby’s in a game of freeze tag or hide-n-seek.]

The entire party activities food and opening presents took 2 hours. Total number of kids, 12. All the kids loved it and asked if I’d do another Scooby Doo birthday party again! 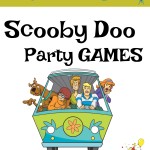