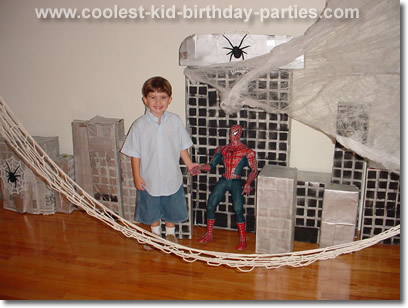 My son’s and daughter’s birthdays are in the same week in August.Instead of throwing two different parties, for his 4th birthday and her 2nd birthday I had one party with two themes: A Barbie – Spider Man Birthday Party.

So, I removed all the furniture from my dining room and from my formal living room and made a room for each child. My daughter had a Barbie Bedroom and my son had Spiderman City.

In order to make Barbie’s room I had a bed with a canopy, wall decorations, TV with a Barbie playing on it, rugs, pillows, the works. For the Spiderman city, I got boxes at the grocery store and painted them with spray paint to look like buildings. Among the buildings I placed a big Spiderman figure, spider webs, and spiders everywhere. My son had a Spiderman costume, but we were so busy we forgot to wear it. 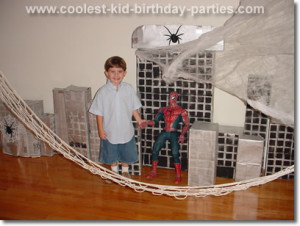 The cake was a round chocolate cake decorated half Barbie, half Spiderman. So, I set the cake on a table where half the tablecloth was Barbie and the other half was Spiderman. In order to decorate the table, I used the goody bags. The goody bags were made with clear cellophane paper and closed with a beautiful bow. In addition, the girls got a Barbie doll and candy. And the boys got a Spiderman battery operated toy and candy. We played singing games, “Spiderman says”, a special Barbie game that I had bought to play on the TV, and other games. Also, we played outside a lot. For food, I rented an ice cone machine, a cotton candy machine and a popcorn machine. I decorated the location where I had the machines like a fair. Also, we grilled hot dogs, had peanuts, chips, and more. Finally, everything was served on Barbie partyware and Spiderman birthday partyware.