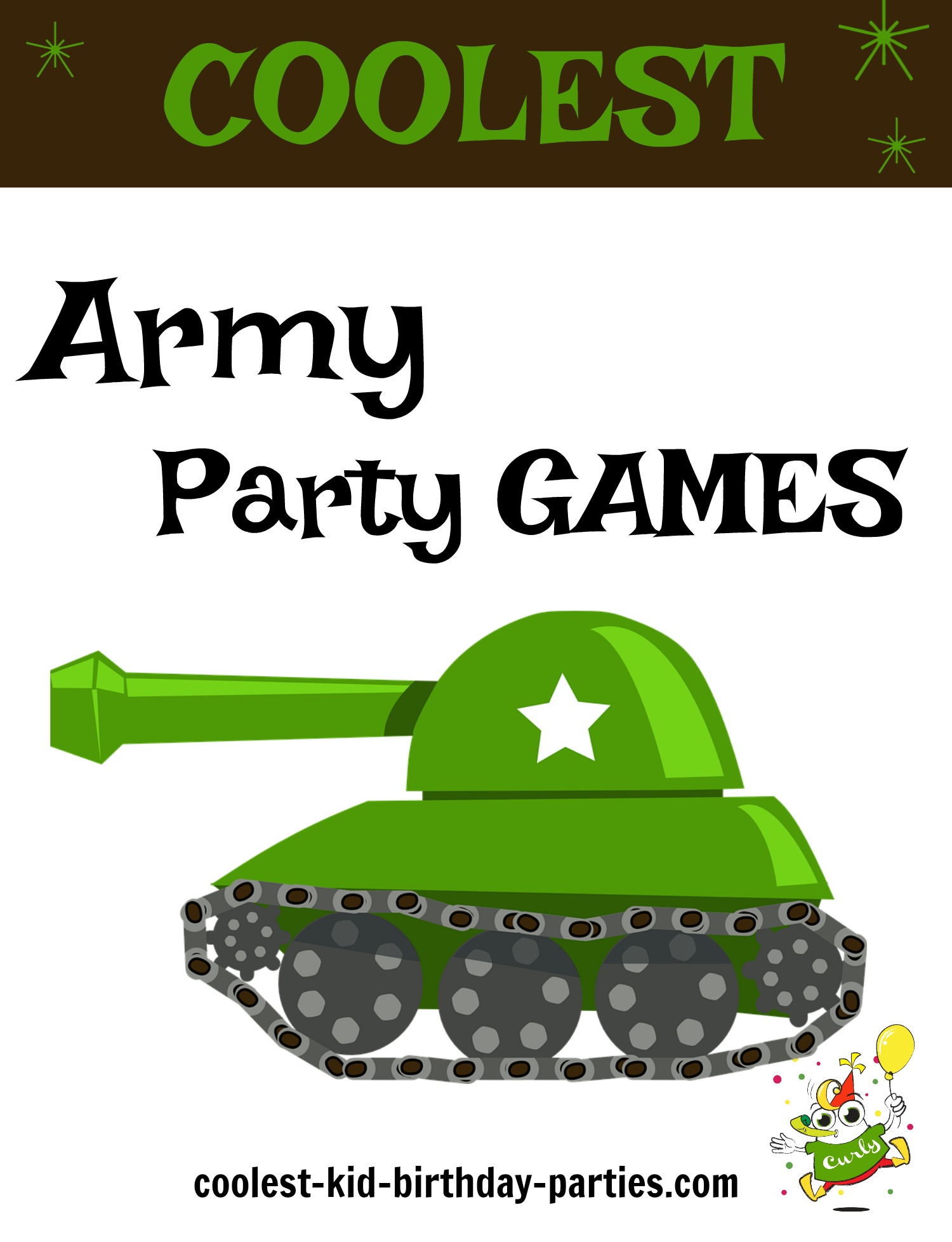 Before any of the birthday party games, assign an adult to be a drill sergeant who gives the kids a physical warm-up (push-ups, jumping jacks, crawling exercises, etc.). After each exercise, the kids are ordered to yell “Yes, Sir/Ma’am”.

The drill sergeant can say things like “Our time here is not easy, but very challenging… You will get dirty, and use all your might, keep your head up high and at the end you’ll be honored with cake and ice cream all followed by ‘Yes sir’, do you understand? I can’t hear you, does everyone understand?!”.

Then between each game the drill sergeant lines up all the ‘soldiers’ and does role call (army-style). The drill sergeant can then march them to the area where the next game will be held, and announce a ‘special message from headquarters’ regarding the next game being played. After every game, the kids can get a higher rank and also call them each time by their new rank, for example if they started as ‘Private’, they then would become ‘Corporal’, then ‘Sergeant’, etc.

At the end of all the birthday party games, award medals, purple heart stickers, and/or certificates to all the kids for great teamwork and pulling through tough times.

Here are some great Army Birthday Party Games to check out:

Construct two walls (made out of cardboard and spray-painted camouflage), then use the water balloons the kids made during the ice breaker activities to start the water war between two groups (Tip: there is no such thing as too many water balloons!!). And, of course, this is one of those summer birthday party games.

Here’s one of those challenging relay-race-type birthday party games. As one of the urgent assignments, your unit must put out a fire that is destroying civilian crops!! Divide everyone into two teams and line up the teams next to each other. Then, put a bucket full of water at the head of each line and give the first kid in each line a large cup full of water. About 40 ft away, place an empty bucket for each team.

Then blow a whistle or say “GO!”, The first person in each team runs to the empty bucket, pours the water into it, and races back to their team with the empty cup. They then give the empty cup to the next teammate who fills the cup, runs to the bucket, pours the water in it and brings the cup back to the next player. When each team member has run down and back again (or to make it longer, run down and back again twice) the game is over. To see which team has carried the most water down, insert sticks into each bucket and compare the water lines.

Simple yet fun activity. Before the party hide lots of little toy soldiers all around the party area. At the party the kids need to go out (fully armed) to look and capture as many enemy soldiers as they can find. The first one to find the most soldiers, wins. You can also split the group up into a few teams and have them look together as a team.

Split the kids into two groups. In each group designate two that are injured. The kids have to run across the yard to their injured teammates and wrap them up with a whole roll of toilet paper, lay them on the gurney or stretcher (beach towel) and carefully carry them (one kid at each corner) to the home base and run back to get the other injured soldier, wrap & carry them back to be the first team to win the race.

Pin the Medal on the Soldier

This is just like ‘Pin the tail on the donkey’ but with an army-twist to it. You’ll need a poster of a soldier and on the left-hand side of his chest mark where the medal should be put (or tape a drawing of a medal so that all the kids know where they need to put it). Then blindfold each guest one by one, give them a medal (write their name on it and put a piece of tape on the back), turn them around a few times and let them try and put the medal on the soldier’s chest. The closest is the winner. This is one of the birthday party games the kids will really love.

For this Capture the Flag Army party game you need two teams. Differentiate the teams with brown and green camouflage face paint. Assign a safe spot where each teams’ flags will be placed. Designate a jail area for each team. Assign defenders to defend the flag and the jail. Then assign attackers to try to steal the flag and break free jailed team mates. Assign attackers to capture the opposition who have crossed the enemy line and put them in jail. The game ends when the flag is captured and brought to the opposite side.

This is played just like Hot Potato. As music is playing have children pass the “grenade” (we used a medium sized green ball). Once the music stops the person still holding the “grenade” is out! Keep on going until one person is left and is the winner!

You play shoot the enemy simply by taking army men or any small figures and shooting them with a foam dart gun. the You can shoot the figures off a ledge of a pool or any other ledge. Line the figures around the pool or an edge. Give them 30 seconds to see how many figures they can shoot. If using a pool edge after the kids take their turn have them dive in to see who can collect the most “Treasure”. Whoever shoots the most enemies wins.

This game can only be played at night. Start out by making a bunch of obstacles and put a few flashlights here and there for a little light, then turn the lights out and have the kids try to reach the destination. Once they reach the destination there will be a cup with a clue in it on how to earn their medal (prize). In order for them to read it they have to go back to one of the flashlights in the obstacle course and read it. The first kid to reach the prize wins.

(This game is recommended for kids over the age of seven). Most kids have never peeled potatoes, but the Special Forces are legendary for having cooks who peel hundreds of pounds of potatoes in one day!! Give each kid a safe-grip potato peeler and a big potato, and see who can get the job done the fastest! This is one of the most hilarious Army birthday party games and can also be played with two teams competing against each other. Also, you can photograph each kid peeling potatoes and then print out the photos to give out as thank-you notes for the party. [Important Note from Sherry K. – After the kids peel so many, you’ll probably be eating potatoes for days!! Sounds like a great game.. just thought to remind all of us to make use of the potatoes after they’re peeled, it would be a waste to throw them away].

Tie a rope to a large tree (make sure the knot is super tight). Then time each kid to see how long it takes him/her to climb up the rope… whoever gets the fastest time wins! You can also tie two ropes and then split the kids into two teams, then on the mark of ‘GO’, they race to see which team has all it’s team members climb up the rope and back.

This is one of the classic birthday party games. You can also get the adults to help with tugging. Just get a long rope and possibly put a plastic swimming pool with water between the teams. You can also place the swimming pool in really wet mud, that way the kids get wet, and dirty!

This is a great way to get the kids to interact. Prepare a bunch of balloons ahead of time, each with a paper inside that has a different instruction (such as ‘Do 10 jumping jacks’, ‘Do 5 push ups’, ‘Collect a game prize’, ‘Trade game prizes with anyone’, ‘Tell someone else to do 10 jumping jacks’, etc). Have the kids take balloons one by one, pop them and fill out the instructions.

Here’s one of those really cool birthday party games. As obstacles, you can use tires to run through, a rope to swing across a water hazard such as an inflatable pool, tunnels made from cardboard refrigerator boxes spray-painted green, weaving through garbage cans, potato sack jumping, crawling under Special Forces nets (if you don’t have Special Forces nets take 8 garden stakes and make 4 columns, then attach strings to the stakes by crisscrossing across so that the kids can crawl under), and of course jumping jacks to build up a healthy appetite. While all this theme party action is taking place, parents can blow whistles, squirt the kids with water guns and throw water balloons at them. Make sure you have course-completion medals.

Prepare camouflage bean bags (grenades) and have the kids throw them at cans filled with a little bit of sand or dirt, or into trash cans or chalk-painted circles on the driveway. Most points wins.

Split the group up into two teams, each team gets a color. Set up designated spots with team-colored flags on them and hide these flags in various places around the party area. Assign a few people (possibly older kids that aren’t part of the game) to walk around with sacks full of balls (best if these are foam balls, or any kind of ball that is soft, so that noone gets hurt). The object of the game is to find all of your team’s flags first, but if one person on your team gets hit by a ball-thrower, the ball-thrower decides something to make them or their entire team do (push-ups, jumping jacks, sit-ups.., should be no more than 10). The first team to find all their flags is the winning team.

Split the kids into two teams, supply them with guns (water guns) and grenades (water balloons) and let them play war! The team to surrender loses.

Pin the Turret on the Tank

This is very simple! Just like “Pin the tail on the donkey”, but this time it’s “Pin the turret on the tank”. You will need a big picture of a tank and each kid will have a turret to try and pin on the tank.

Put a pole into the ground making sure its secure. Grease pole with oil or butter, place flag on top and have them climb. If your feet hit the ground its the next kids turn, keep going until someone gets the flag!!

Set up a table for an arm wrestling competition, you can have a separate right-hand and left-hand competition. This is a fun way to get everyone cheering for one another (get the adults to play as well).

Take a look at our complete Airplane Birthday Party section for more of the coolest party-planning ideas.