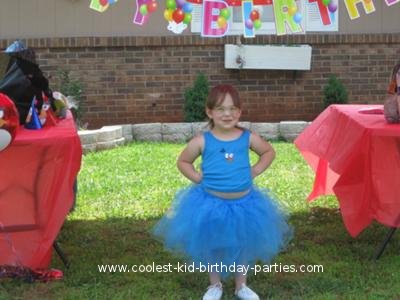 We bought some red and blue dodge balls from the dollar store and blew up green balloons. We put printed pigs faces on the balloons and it was a huge hit. Then we took ten 2 liter soda bottles and painted them green (you can use green bottles we just didn’t have any) and we put pigs faces on those and took two small dodge balls to go with this game which we dubbed bowling for pigs.

The tent was surrounded by ballons with angry birds face on them (again printouts) and the gift bags where green with hairbows made to look like the pigs.

And of course the cake was the famous Red Angry Bird.

I also made my daughter a blue tutu with a tank top and cut out pieces of iron on patches to make the Blue Angry Birds face on the shirt. She has a red Angry Bird Hair bow to go with the outfit. 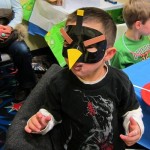