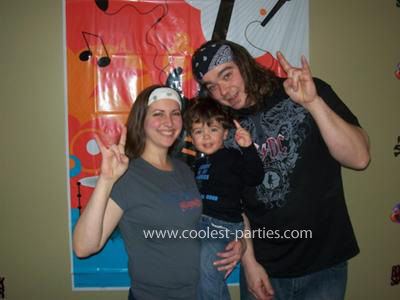 When my son Jack was turning 3 he was very into music and guitars. He was telling us he wanted to be a rock star when he grew up, so I wasn’t surprised when he wanted a rock star party.

I stared by taking some pictures of him playing one of his toy guitars with a microphone. I used a photo program to change the pictures to colouring pictures. I made an old school concert flyer using these pictures and lots of bold print. It announced that “For the first time ever, Jack James turns 3”, followed with details of when: the party day, where: the House of Blue (because our house is blue), etc.

Next I went to the ticket master website and used one of the pictures from the flyer and the same information and ordered actual tickets to send to the guests with the flyers. This was one of the details we got the most comments on. Guests were invited to dress for a concert. Many of the parents and children were dressed in band shirts and were ready to rock.

We went to a party store to pick up some decorations and prizes. We found a backdrop that looked like a stage, star glasses, blow up guitars, and some drum and guitar decorations. We also picked up a few items from the dollar store (plastic microphones, stickers, packs of small instruments, gift bags and gift wrap). I always get one set of plates and cups to go with the theme and then pick a complimenting colour to supplement the rest and save on cost.

Each year we make a thematic shirt for Jack to wear at his party. For this party, we had a shirt made that had a silver guitar on it and said “Rockin’ is my business” across the middle with “and business is good” across the bottom.

We set up the back drop, decorated and put out all Jack’s various musical instruments for the kids to play with during the party.

When the kids arrived at the party, they each had a microphone with their name on it (done in stickers from the dollar store) and were given a variety of stickers to decorate them. Next we played pass the parcel to “I wanna rock and roll all night”. Each present was a blow up guitar. Last, we had a freeze dance party to the same song and each child was given a pair of star shaped glasses for playing.

We had pizza for lunch followed by a double guitar cake. I used a template and cut the guitars out of two a 9×13 cakes. We ate one cake at the friend party and I touched up the other guitar to serve at the family party the next day.

We ended the party with a slide show of the last year set to “Bad to the Bone” and “Big Jack”. The children were given a gift bag with a few more small items from the dollar store and each put in their microphones and glasses to take home with them.

This party was really fun to throw and I will always have great memories of it.

One thing we have always done that I highly recommend, is to determine the party theme a few months in advance. That allows time to research on great sites like this and spread the cost out so it doesn’t seem like a big expense the month of the party. We also make a point to take a family photo at each party. During a party, things move so quickly, you sometimes feel like you missed the whole thing. The family photo is a nice way to remember the moment and why you are doing it in the first place. 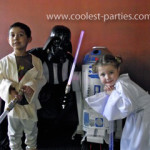 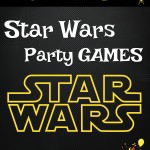