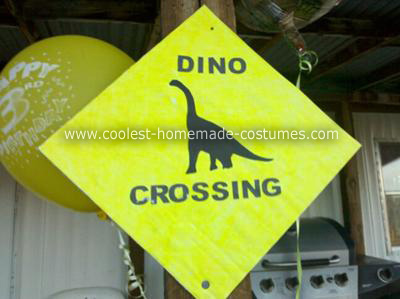 My son decided he wanted his third birthday party to by dinosaur themed. Honestly I wasn’t thrilled when I heard this because it didn’t sound fun to me, but after some thought it turned out great.

For decorations I bought some from Party America. They were really nice neutral color scheme. My favorite thing I bought from there was a big wall mural that looked like a cave and you could see dinosaurs through it, and it was only five bucks! So we had that hanging on the main wall, and all the presents were stacked in front of it with a few of his toy dinosaurs laying around.

I also made some decorations myself. I made some bright yellow Dino Crossing signs. For those I just colored some paper with highlighters, cut out the letters, and some silhouettes of dinosaurs out of black and then glued them on. I then glued it onto a piece of cardboard for some extra stability. And then I also cut out black dinosaur footprints and tracked them across the room. I was going to put them outside too but it rained that day.

In the kitchen was where I had the cake set up. I used some fake palm leaves to line where the cake and plates were set. The cake was a volcano cake that I made with a bundt cake on top of a pan cake, and some green and red frosting.

I had the kids go out to the sand box and dig for fossils, and then once they found one they got to color it. Those were really cool I found them at the dollar store, a box of four for a dollar fifty. And then we just opened presents and had a dinosaur movie playing in the background.

We didn’t get to do everything I had wanted to do on the count of the rain but it was still a lot of fun and my son still talks about it! 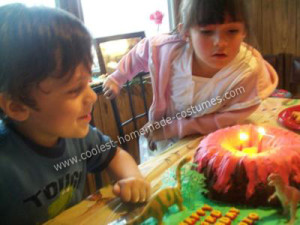 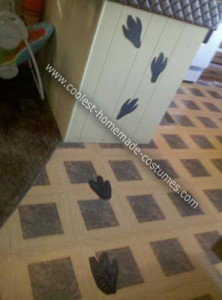 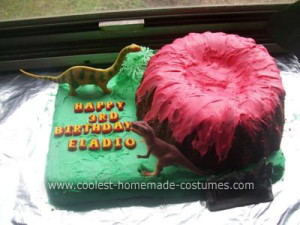