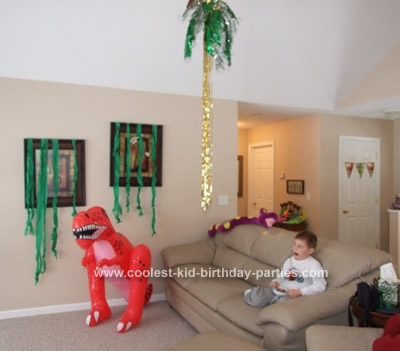 Dinosaur birthday ideas and photos by: Bethany from Ludington, MI

Here are our ideas for a Dinosaur birthday party for a 5-year-old.

Invitations: I found a t-rex skeleton clipart online and put it at the top of my invite. I just made them up in Word and printed on green paper. The invite read: JACKSON IS TURNING FIVE! Please join us for a dino-mite celebration in his honor! Where: Jackson’s cave (address) When: Saturday January 12th from 1 – 3 Snacks will be served and games will be played! Don’t be extinct! Please R.S.V.P to Jackson’s Mamasaurus @ (phone #)

Décor for the Dinosaur birthday: Table Cloths, cutlery streamers – Dollar Store. Balloons – Various coordinating colors were tied to the chairs with a special mylar tied to the birthday boy’s chair. I twisted green crepe paper together, scrunched it in my hands and ripped it a bit to make “vines”. Houseplants with little stones and mini plastic dinos were centerpieces. We also had a Happy Birthday banner flag banners, plates, cups, Mylar and pin the horn on the triceratops game and pinata (doubles as décor and game!) 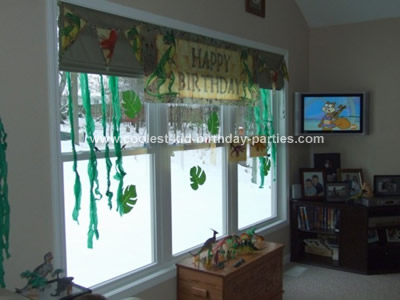 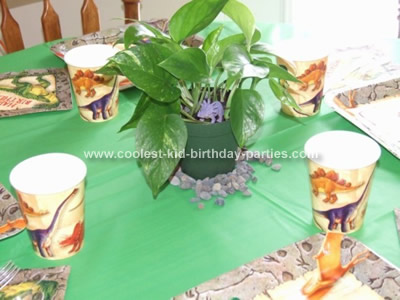 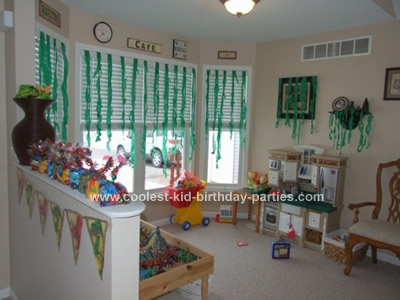 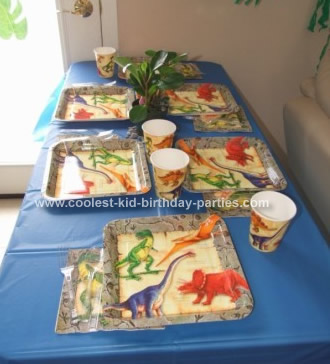 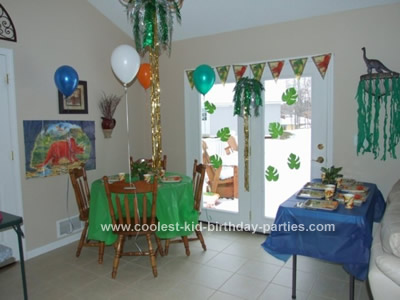 Brontosaurus-shaped cake (homemade). Store-bought cake I ordered and decorated myself with the little dinos Games/Activities. 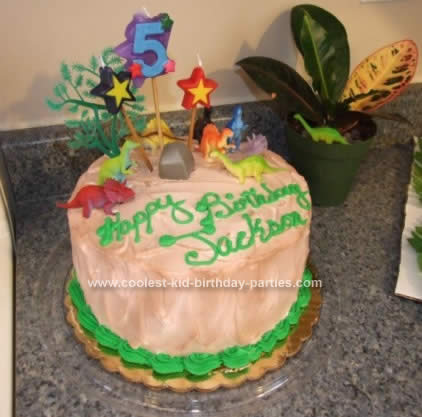 Each guest that came to the dinosaur birthday party got to put on a dino tat upon arrival. Pin the horn on the triceratops which also doubles as a poster. I would recommend having a different mask on hand as the one that came with the game fell apart. Prize = dinosaur fruit snacks (just for participating), Hatch the Dinosaur Eggs (I put mini dinosaurs in helium-quality balloons and let each guest “hatch” two eggs by stomping or sitting on them). They kept the dinos as a prize. Pinata – I would recommend putting a small tear or something in it first because I swear this thing was indestructible! The prize was the candy of course.

Our dinosaur party was only two hours…it should have been three as we were running a bit behind toward the end. I did plan to play “Pass the Dino” (Hot potato) with a stuffed dinosaur but there wasn’t enough time.