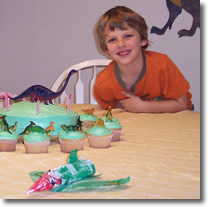 Dinosaur party ideas and photos by: Rebecca from Ventura, CA

For my son’s 7th birthday we put together a dinosaur party.

I bought thin wooden Dinos in three styles. I painted them with poster paint, filled in details with black Sharpie markers and attached magnets to the back. The first Dino had all the party info (party time etc.) and was sent with the invite. The second had the child’s name on it and was a place card.

The third said “Thanks for a dino-mite day” and was sent with the thank you. This way, each child ends up with three different Dino magnets. 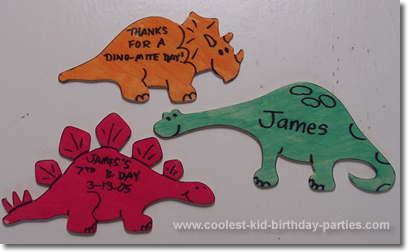 The Dinosaur party invites read “Stampede to the Nesting Grounds for James Birthday Dinosaur Expedition on March 13 from 1:30-3:30 at the Smith Cave and Quarry. RSVP to the prehistoric parents. Don’t be Extinct.”

For the Dinosaur party decorations, we made vines out of strips of brown paper bags twisted and taped together with packing tape. The leaves were cut from green party streamers with the veins drawn with black Sharpie marker. (They look realistic as they flutter in the breeze.) I cut out large Dino footprints from black HEFTY trash bags and taped them to the cement leading up to the house with Poster tape. It really held, was rainsafe, not slippery and easy to cut a large number at a time. 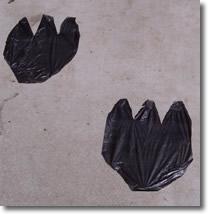 We trimmed up all our trees right before the party and used the cuttings for decorations.

We made a cave at the entry way by throwing a dinosaur sheet over a playhouse form, secured it with clothespins and added dark green curtains above on a tension rod so that kids could not see above the cave.

A cardboard sign read “Enter the Jungle through Dinosaur Cave .” Two spears made out of wrapping paper tubes were crossed over the sign.

We played rainforest sound effects on a CD from Target. 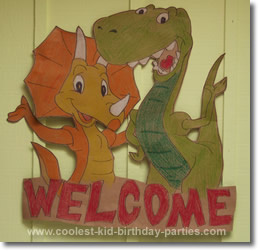 Coming out of the cave, kids were surprised by a realistic Dino made by hanging my kid’s Dino costume over my floor lamp and stuffing with blankets. 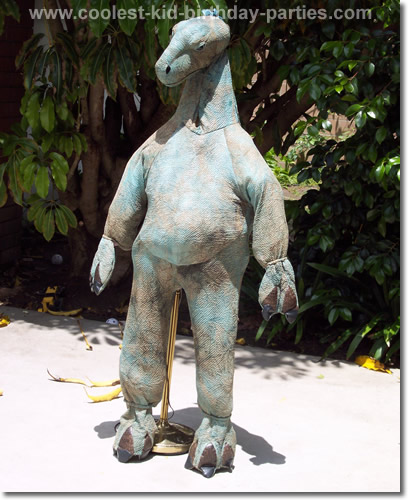 I used a projector from Hearthsong.com ($29.95) that changes small images into big images when projected onto the wall. This way, I made 14 big cartoon Dinos drawn onto brown postal wrap which my kids colored with crayons. 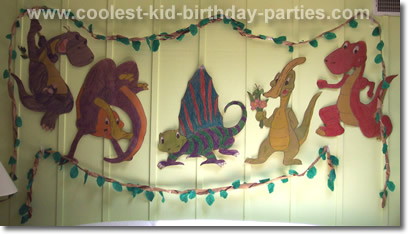 Upon arrival to our Dinosaur party, kids excavated dinosaur skeletons at the quarry which I made 3 weeks before party. Simply use 3 parts water, 2 parts cornstarch, and 4 parts sand. Heat on stove until mixture is like putty, mold it around dinosaurs on a cookie sheet and bake for 30 minutes at 170 degrees, or longer if they are not dry. (Be careful to monitor the drying process – mine started to mold in the garage so I sprayed them with Lysol.) I covered the Dino fossils with leftover sand in a box so they had to dig them out first. They busted them open with a plastic hammer, removed most of the sand, then washed them in a tub of water. I provided a towel and Ziploc bags. 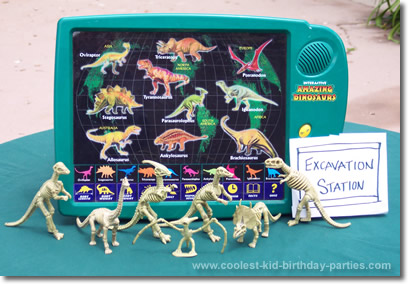 Inside the Dinosaur party area, we passed out paper dinosaur gift bags pre-filled with Dino tattoos, Dino micro machines, and small plastic Dinos. We also included dinosaur Fact cards and a book “What Really happened to the Dinosaurs?”.

We played “Hot Lava Rock,” which is really Hot Potato. The Lava Rock was a piece of Styrofoam broken into a rock form and then spray-painted black. This made a safe alternative to a real rock, but looked real. The winner got a prize and everyone received another type of special rock – a geode with printed directions on how to break open later.

We talked about volcanoes then went outside to see one erupt. I had made a volcano by putting papier-mâché over a form I made by chipping away at more Styrofoam from old computer boxes. I molded a Dixie cup into the top as the receptacle and spray-painted it black. The volcano was set on a table covered with a green plastic tablecloth surrounded by large plastic dinosaurs. 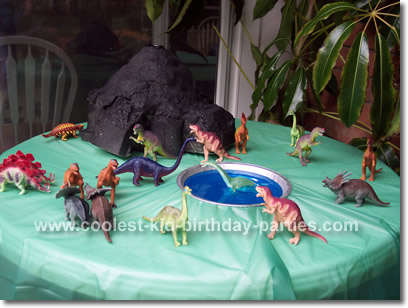 Next to the volcano, I made a lake for the swimming Dino by putting a pie pan underneath the tablecloth, putting a second pie pan filled with blue Jell-O on top of the tablecloth, but nesting inside the first. I added leaves to hide the silver on the pan. When it was time to erupt, each child placed a new Dixie cup pre-filled with baking soda into the receptacle and then added vinegar made red with food coloring. After each eruption, the Dixie cup was removed and the child selected a Dino to keep from the diorama. So that the kids wouldn’t fight over who was next, I had numbered the Dixie cups.

Next, the kids went on a Dino Egg Hunt for small plastic eggs with Dinos in them. I also hid a few small bones made from the leftover fossil mixture and gave a special prize to those who found these. When they finished, they each got a Dino grabber (a stick with a Dino head on it that grabs) to be used for the next game – “Raid the Pterodactyl Nest”. We formed a circle, spread out a cloth with chocolate eggs on it and passed out small bowls. We told the kids that they had exactly one minute to grab as many pterodactyl eggs as they could before mama pterodactyl came back. They were not allowed to use their hands, only their Dino grabbers. Every kid got about 17 eggs! As a prize, each kid keeps his eggs and gets a pterodactyl glider. 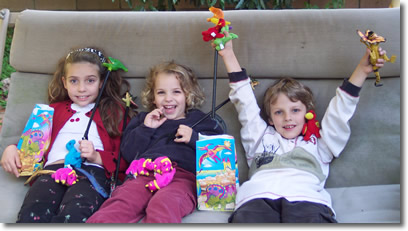 The last Dinosaur party game was “Nesting Ground Relay”. We divided into two teams – the Triceratopses and the Stegosauruses. Each team had to jump across the tar pits (a hefty bag cut into a wavy strip and secured to ground with poster tape), get to the nesting grounds (Astroturf), hatch one baby Dino (pop balloons that were pre-filled with a squishy small Dino), and return to end of line with the Dino. They were told to rush because a T. Rex was known to be in the neighborhood. Each kid ended up going about three times before all Dinos were hatched.

Everyone at our Dinosaur party got a prize from the Mystery box which was a cardboard box with holes cut through the top with wooden snakes hidden in packing pellets. My husband had also cut a hole in the bottom so that when he held the box, he could reach his hand up and grab the kid reaching in through the top.

Next was Dinosaur party cake and ice cream bars. Place settings were green, yellow and orange with wooden Dino name place tags, stuffed mini Dinos and volcanoes. The volcanos were small cones made from black construction paper. I then took red cellophane squares and put bags of candy corn (labeled T.Rex teeth), and bags of candy bones (labeled Dino bones) and put them in the center of square. I gathered up edges into a rubber band and pushed the top through the hole in the volcano to look like lava bursting out. 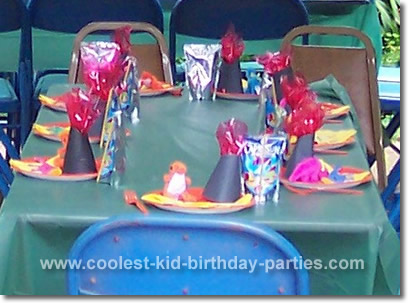 The Dinosaur party cake was a sheet cake with green frosting and a small blue lake. I stacked two round cakes on top with a bundt cake on top of that. I had to trim off part of the bundt cake to get the correct angle. The extra pieces were used to fill in gaps between the round cakes. These three cakes made the volcano which was frosted with chocolate. Lava was made using vanilla frosting colored red with Wilton ‘s red concentrated paste (it tastes terrible and stains clothes, but looks great.) I gooped so much on, it looked like a lava flow. I bought a bucket of Dinos made by Animal Planet at Toys R Us ($5.95) because it had palm trees and a waterfall rock that I could frost with blue and make it flow into my lake. Blue edible sparkles made the water shimmer. Of course the red candles came out of the volcano. My tip is to let the frosting harden in the fridge before adding the next color. 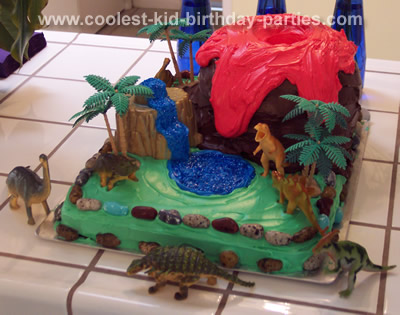 During the cake time, my husband came out with a local newspaper and acted really excited when he read the headline “Exciting Egg-Sighting.” We had pasted an article detailing how traffic had been stopped on the 101 due to unusually large eggs blocking traffic.

We found a newspaper picture of cars stopped by recent floods in our area and glued giant eggs onto the picture. The article then said:

“If any more eggs are found, residents are encouraged to break them open to see what’s inside.” 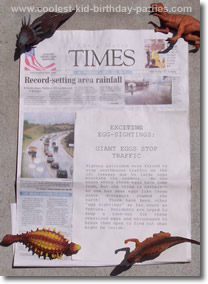 Instead of using a balloon, we had made a huge papier-mâché egg out of a kitchen trash bag blown up and secured with rubber bands and tape (see EnchantedLearning.com) and filled it with Dino puppets we found at Costco. Everyone worked to bust it open and grab one dinosaur.

They spent the rest of the party chasing each other with spears I had made out of wrapping paper tubes with black spray painted cardboard arrowheads (very flimsy and cut blunt for safety). 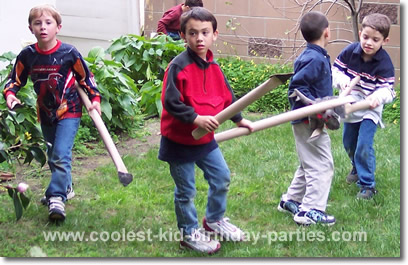 We had typical party food except that we had a cheese tray with cheese cut into bone shapes with cookie cutter from Michael ‘s Crafts and bouquets of leaves instead of flowers. The Dinosaur party took two hours and was a riot of fun!