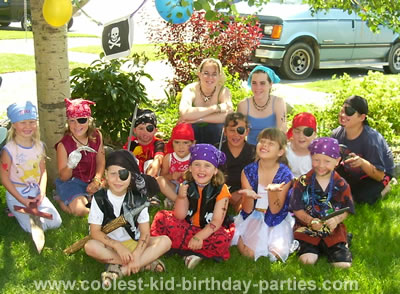 My Daughter Allyn really wanted a Pirate party so the boys could attend and play too. (Last year we did Cinderella’s Tea Party.) In the photo below she’s wearing a purple bandanna front and center.

Bottom line is that THIS SITE gave me everything I needed, with a little embellishment and personal touch, to have the “Hit of the street” pirate party. (15 kids under 11 live on my cul-de-sac). It’s now one month later and the kids are all asking for next year’s idea now so they can anticipate the fun. And the moms are all glaring at me because their kids want the same kind of flash.

You helped my kid (who I think is the coolest) have the COOLEST Pirate party!!! THANKS! Here’s what we did:

So, we sent out the invitations for the pirate party two weeks in advance (summer birthdays require planning!!!) The crazy thing is that I found this English to Pirate Translator on this World Wide Web of ours…

We hung a skeleton from a flag pole in the front lawn and decorated with jewel tone balloons, skull and crossbones we downloaded from Google, enlarged and photocopied, and Mardi Gras beads (shiny and lots of them). Then I had a big black urn for plants that we made into a GROG pot for thirsty pirates. (With ice and Rootbeer and Kool Aid Jammers.)

Also, we decorated a big Lawn Chair with necklaces and cushions and made a big sign that said Captain’s Chair (for the pirate party Birthday Girl.)

Mommy dressed up as a Pirate Servant (I am sure the dads in the neighborhood are still calling me Wench)!

When the guests arrived we had body paints and tattooed them, added beards, scars etc. to add to their costumes.

The whole pirate party was a Treasure Hunt around the neighborhood. I used envelopes with clues on the outside (for those who could read) and digital photos of the locations inside in case they couldn’t read or figure it out. Each station (other back yards and the local school yard) had pirate activities from your site – Swab the Deck, Cannonball Wars, Mark the Treasure. The best was the treasure hunt (400 marbles scattered in the pea gravel at the school playground for them to find)

Prizes were Parrots – a stuffed one, a garden ornament and a statue all from the dollar store. And every Pirate needs a parrot….

For Pirate theme party food, I served goldfish and Ritz Scuba Crackers with dip and we made Pigs in a blanket, cut in half and dipped in ketchup – we called them Peasant fingers. The cake was a slab decorated with Pirate stuff from the fish department of the local pet store (sunken treasure and Pirate Ship) with plastic coins around the outside.

The last clue, following cake and food and gifts was lead to by my daughter (who had no idea where it was). She lead them to the X marks the spot where there was a Treasure Chest filled with Thank you treasures for each of her friends. We bought wooden treasure boxes at the dollar store. Then I painted each child’s name on and my daughter glued on sea shells and stones. We filled each treasure with pirate stuff, Chocolate coins, jewelry, tattoos and anything gold colored we could find for the “goody boxes”… the kids loved them.

Following the Pirate theme party we sent a photo with a thank you verse for her Mateys. (We should have put it in a dollar store frame decorated with jewels but that was an afterthought.)

Pirate party ideas and photos by: Brenda from Coburg, ON, Canada 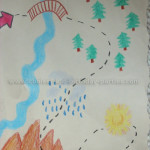