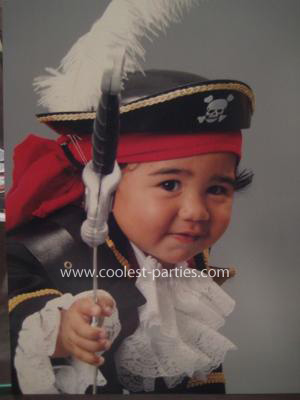 About two months before Sebastian’s Pirate 1st Birthday Party, I bought a child penguin tail tuxedo for $3.00 at the Salvation Army thrift store, along with a bag of gold military buttons for 25 cents, gold color trim for 25 cents, white lace for $1.00.

His dad and I sewed the gold trim around the edges of the tuxedo and changed all the buttons to the gold ones.  I used an old onesie to which I sewed on the lace and also sewed on lace to the cuffs of the tuxedo jacket.

His pirate captain costume consisted of the onesie that had the white ruffles showing, with a red tuxedo vest over that, and the tuxedo jacket over that.  On his head we put a red bandana that was actually and old red baby girl dress, and a pirate hat also purchased for 50 cents at the thrift store.

His entire costume and his dad’s were made from thrift store purchases or what he had at home. 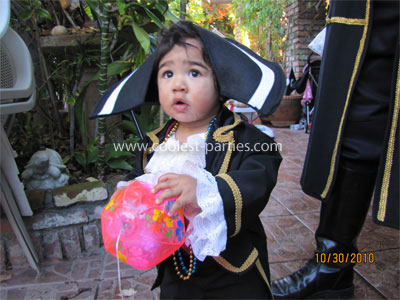 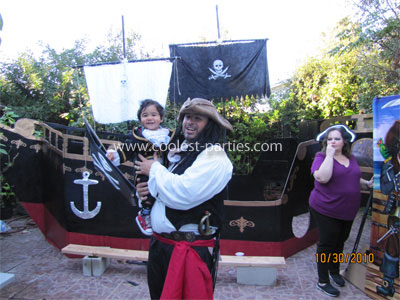 Once the costume was made I put it on him and took some photos.  I used one of the photos and printed up Save the Date photo cards at Costco ($15.00 for 50 with envelopes included) and mailed them out 5 weeks before the Pirate 1st Birthday Party.

I used another photo to print on the Pirate 1st Birthday Party invitations that we made from ourselves and hand-delivered to our guests.  All of our guests still have the invitations because they liked them so much.  The invitations were Message in a bottle.  I collected glass beer bottles from a restaurant, washed them, and peeled off the beer labels. Also from a restaurant I had collected the corks from their wine bottles.  I filled the bottles with a bit of sand, some small sea shells, a sword pick, a pirate flag and the scroll that was tied with red ribbon that was sticking out of the bottle so they could pull out the scroll.  The bottles were capped with the cork from the wine bottles.  The swords inside the bottle were party picks that I spray painted black.   The small sea shells came from Hawaiian Seashell Leis that I bought for 75 cents a bag at the thrift store and I un-strung them.  The pirate flags I made out of address mailing labels that I printed a Pirate flag motif on half the label and “Arggg” on the other.  I folded the label together in the middle around a toothpick and they became flags.  I also used these same toothpick flags on the fruit and cheese platter.  The invitation scroll was printed on goldenrod resume paper and I used the Blackadder ITC font to give it an authentic pirate feel.  I put his picture at the top of the wording and made all the copies.  Then I took the copies and ripped the edges off of all four sides of the paper and burned the edges with a lighter, rolled them up and tied them. 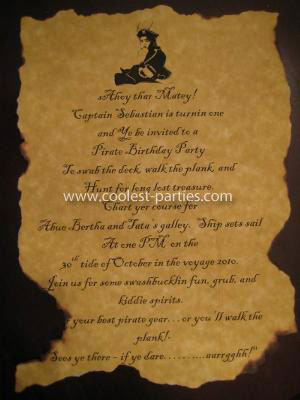 I put this skull and cross bones label on the outside of the bottles. Here is a photo of the bottled Pirate 1st Birthday Party invitation next to the centerpiece: 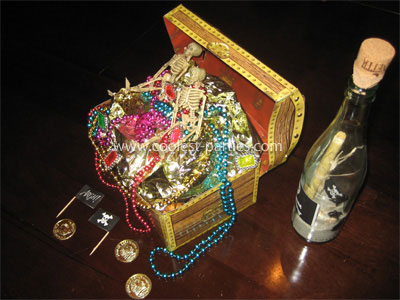 For a few guests that live out of town, including our friends in Italy, I did the same thing with a plastic water bottle and mailed them. The guests were really WOWED with the Pirate 1st Birthday Party invites!

For the Pirate 1st Birthday Party food, I made little name cards that I put by the food that consisted of jerk chicken drumsticks called Parrot Legs, Teriyaki meatballs called Cannon Balls, for the children I had Hot dog Sailboats served on paper trays with goldfish crackers around them.  The sails were made by threading paper Sails with skull and crossbones image onto skewers and attaching each sail to the hotdogs. I just printed sails, cut them and put them on the wooden skewers.

For Pirate 1st Birthday Party decorations, I made treasure chest centerpieces that I bought from Oriental Trading Company and filled them with scrunched up gold tissue paper, on top of that I put plastic skeletons (those came from garland purchased from the 99 Cent Store), plastic gold coins, plastic gemstone rings, and colored Mardi-Gras beads.  I already had white table cloths so I used those and put a piece of black plastic table cloth over that and some fishnet over that. I placed plastic gold coins on the tables as well as gold Mardi Gras beads.

I also made a Pirate 1st Birthday Party greetings board for guests to sign: 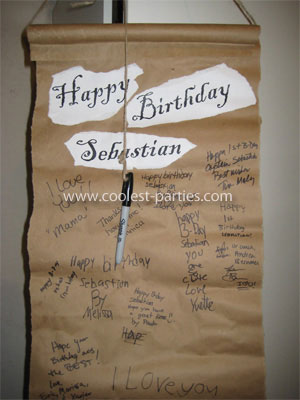 On the walls I had a Pirate 1st Birthday Party Scene Setter and Pirate cut-outs.  I used Pirate Themed paper plates and napkins and streamers purchased from the 99 Cent Store.  I put up two photo props that I purchased from Oriental Trading Company and we made a HUGE Pirate Ship using instructions purchased from Mr. McGroovys website.

The cardboard refrigerator boxes that we used to make the ship were free at Sears we used some black paint we already had along with purchased red and gold spray paint from Walmart.  For the windows, we used cellophane, and made an anchor out of cardboard covered with foil.  For the Sails we used remnant fabric from the thrift store and PVC pipe from Home Depot.  Everyone at the party went crazy about the Pirate Ship – the kids and adults alike!!  We even had a plank for those who needed to “Walk the Plank”.  The pirate ship took about two weeks to build because we could only work on it after 9pm when Sebastian was sleeping.  The gold detailing on the ship was done by making a stencil that I cut from old X-ray film and I spayed it with gold spray paint.  We loved the pirate ship and were very sad to take it down after the Pirate 1st Birthday Party.

Here they are walking the plank during our Pirate 1st Birthday Party: 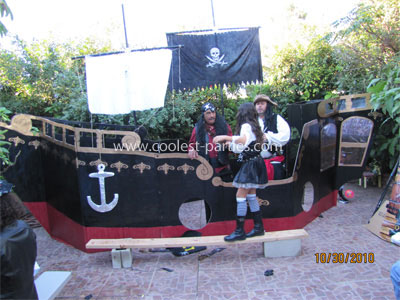 The kids played games and won prizes that I purchased at the 99 Cent Store.  The 99 Cent Store had a HUGE variety of Pirate Themed toys and that is what I handed out as gifts.  They played a couple of rounds of Cannon Ball Pop where he tied an inflated balloon to each kids ankle and the object of the game is to pop everyone else’s balloon without getting yours popped.  The last kid with an un-popped balloon wins.

We did a few rounds of Pass the Skull.  This is the same as hot potato but they pass a plastic pirate skull. Here they are playing Pass the Skull at our Pirate 1st Birthday Party: 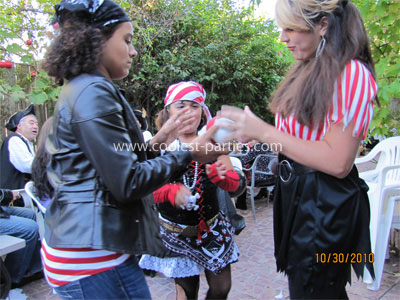 We also played Captain Hooks Treasure Pick up.  I took black plastic party cups and glued the hook to the bottom of the cups.  The hooks were made by cutting the hook off of plastic clothes hangers.  I took tons of Mardi Gras beads that I got in bags from the thrift store and threw them all over the floor.  Each kid put a Hook over their hand and the object of the game is to see who can scoop up the most beads with their hook.  (Careful with cheating as they will try to use their free hand, hahaha)

They also played Musical Islands which is the same as musical chairs and Put the X on the treasure, which is like pin the tail on the donkey.

After those Pirate 1st Birthday Party games, they all did a Treasure Hunt together.  I made a treasure chest out of a big cardboard box and inside the treasure chest I put all of the treat boxes inside.  (The treat boxes were shaped like treasure chests and purchased from Oriental trading company and I filled them with candy, pirate tattoos, pencils and toys). To find the treasure, they had to find clues.  They picked a Captain and were given the first clue.  I used nursery rhymes for the clues.  It started with Itsy bitsy spider went up the ________   All of the kids went to the waterspout where I had put the next clue;  Hickory dickory dock, the _______ ran up the clock  There was a plastic mouse with the next clue taped to it… and so on, until they found the treasure.  After that we had the Pirate Pinata.

For Pirate 1st Birthday Party crafts I had purchased cardboard Treasure Chests from Oriental Trading Company that came with gold ribbons, gold coins, beads, and colored gems that they could glue on to make their own personalized treasure Chests to take home with them.  Another craft I bought from them was the make your own Treasure Map using stickers.  The kids really liked the crafts. 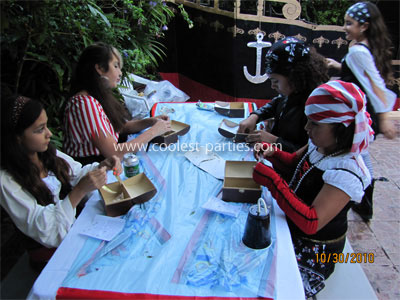 The Pirate 1st Birthday Party cake was decorated by my sister based on ideas from this website.  I ordered the cake from Costco and asked them to leave it all white with nothing at all on it.  My sister purchased a small plastic pirate ship and some palm trees.  She used blue gel icing for the water and for the land she sprinkled crushed cookie crumbs.  She did an awesome job on the cake! 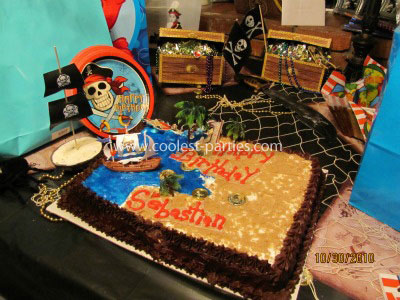 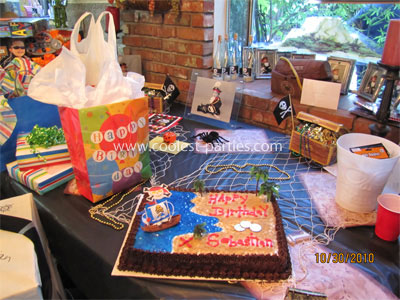 We served cake and ice cream.  For the ice cream, I made ice cream pirate sail boats by using coconut shells.  (I already had the coconut shells that I had previously bought on the Century Novelty website for a luau) I scooped chocolate chip ice cream onto the coconut shells a few days before the party and covered with plastic wrap.  On the day of the party, I just took them out of the freezer, uncovered them and put the same paper sails that I used on the hot dogs.  They looked like little pirate boats, CUTE !!

For Pirate 1st Birthday Party thank you cards, I took two photos from the party and printed photos cards from Costco again. I put the following wording on the cards: “Thanks for celebratin’ with me on the high seas, and thanks for the loot,  t’was kind of ye, Capn Kidd. 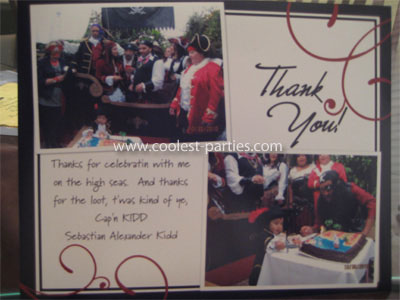 IN CONCLUSION, everyone had such a fun time and we all talked about our Pirate 1st Birthday Party for a while; adults and kids!!  Everyone said that we set the bar really high for Sebastian’s 1st Birthday party and they cant wait for his 2nd birthday.  What I want to emphasize is that much of the stuff came from the second hand store!  Just about all of the guests came in costume, and most costumes were not store bought, they were put together from items found in the second-hand stores.  If you start planning your party well in advance, you have time to make everything, and have FUN doing it.

I have to say I am very grateful for all of the ideas and inspiration that I got from COOLEST-KID-BIRTHDAY-PARTIES.COM and look forward to my sons future birthday parties!

Thanks Elad, and thanks to all of the people who have taken the time to share their wonderful ideas.  I will be thrilled to find out that I have inspired someone else just as I was inspired by all of the ideas on this website.