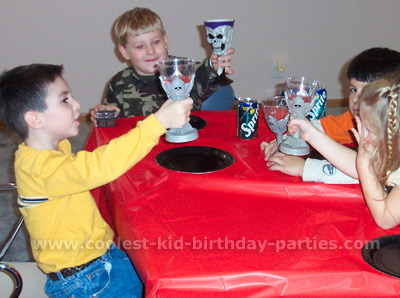 For my sons 6th birthday we had a Pirate Party.

For party decorations I had black plates and napkins, lots of Halloween skeleton stuff (his birthday is in November so I got deals on it). I got these cups with skeletons on them (which the kids got to take home).

I made the hats with Long John Silver hats. In order to cover up their words, I used streamers. Plus it made a nice touch. I had bought some dress up eye patches and earrings to look like a real pirate. For the pirate cake I made a pirate face-this was very easy-it turned out cute. For party games we made a Map on a big piece of cardboard and they had to pin the X on the spot. My son helped me make it.

To receive the goody bags they went on a treasure hunt. I hid them in a well outside that all the kids have seen before. I then took a picture of the well and cut it up like a puzzle. So at the party the kids then had to each pick out a piece of the puzzle out of a bag they were passing around (like hot potato) and when all the pieces were out they put the “map” together. They figured it out and off they went. I made the goody bags look like treasure chests with brown lunch bags and electric tape for the straps and then printed out little handles and ‘keep out’ signs to glue on. I also made a treasure chest piñata out of a box and brown paper. Just fill a box (a thin box so it will break) with candy, wrap with paper and then decorate. Birthday boy or girl can help.

For pirate drink we had made some sharks blood (frozen Kool-aid) for ice, put in sprite (when it melted it looked red like blood) – the boys liked that.

Hope you liked our pirate party!

Pirate party ideas and photos by: Shannon from Minooka, IL