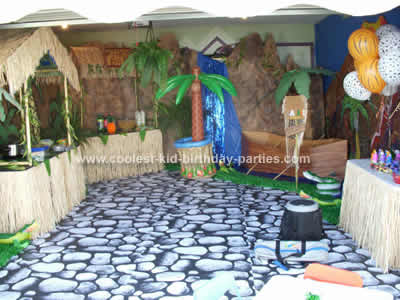 I knew 6 months ahead of time that I wanted to do a safari themed party for my son when he turned 2. As I started the process of safari party ideas, it kept getting more and more in depth. I wanted the party to be outside since it was the middle of September with wonderful weather so I wanted the garage to be transformed into a safari!

I went to Lowes and bought the blue Styrofoam insulation board that is used to build houses, came home and cut them at the top to look like mountains. Then I wrapped it in brown crinkled butcher paper and (gorilla taped) it to the back. I had 9 panels total to hide our entire garage junk. I spray painted them brown and black and painted some palm trees on some of them. We also used a volcano backdrop (attached to the wall) which was made out of cardboard brown butcher paper and paint! The palm trees were made out of a pool noodle with a heavy duty rod in the center to help it stand but have a little limp towards the top and then wrapped in butcher paper around the noodle as well. The leaves were cut and hot glued on top.

The coconuts were paper mached balloons. I ordered cobblestone paper from Shindigz.com and taped it to the garage floor for a “path” effect. I also ordered the blue waterfall paper and tissue grass from Shindigz as well. The canoe was about 5 feet long and made from cardboard with real bamboo ores. It took me over 2 months to get the garage the way I wanted it- but we got it! And I used a great deal of hot glue and gorilla tape!

I had 2 different tiki bars, one for food and one for drinks. I had safari hats, safari bubbles and safari sun glasses for the kids. Also, I had an inflatable palm tree cooler with tons of apple juice boxes and Kool Aid jammers inside for all the kids. I ordered a 6 foot tall inflatable giraffe from the junglestore.com and had 6 inflatable crocodiles, 1 inflatable snake and 1 inflatable monkey. Also, I had a 20’x20′ white tent set up to cover the driveway. I used palm trees that I bought from party city on the poles of the tent to add to the decoration! I ordered 100 assorted safari balloons and had them blown up at a local store down the street.

We also had an enormous inflatable jungle play land bounce house for the kids. (Well for us too)! I had an inflatable giraffe ball pit with a slide safari croquet set up in the side yard. We also had a lion bean bag toss. The cake was baked and iced at a local bakery called Hansel and Gretel’s. I picked the cake up the day before and decorated it with all the animals’ trees, shrubs, grass and bushes! We had jungle juice (punch) and of course a couple of sodas for the adults. We did chex mix meatballs (which were a big hit), jalapeno, baguette breads, chips and a fantastic dip, veggie tray and I got a watermelon and cut the top off gutted it, jagged the edges and cut up small squares out of the gutted watermelon and put it back in their for a cool looking fruit bowl!

The party was a big hit and I had a lot of fun planning and decorating. I am not going to lie though- my safari party ideas cost a fortune- but was totally worth it!

Safari Party ideas and photos by: Haily from Kannapolis, NC