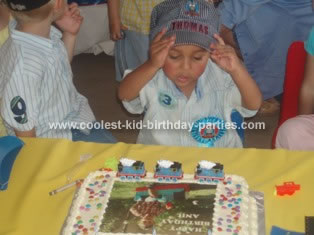 My son who just turned three on April 15, 2007, is crazy about trains of all kinds, and he is a big fan of Thomas the Tank Engine and Friends. It came as no surprise that he asked for a Thomas the train birthday party for his birthday this year. As this is the first birthday where he has a grasp on the concept of a party and inviting friends, I decided to make his one true birthday wish come true. Thus began the party planning.

In preparation for the big Thomas the Train birthday, I surfed the web in search of ideas and enlisted the help of my mother who is very creative. It was a nice way to include Gammy as we are currently living in South Africa, and she is in Texas, USA. We decided on some great party favors, activities for the big day, and interesting ways to accessorize for the day.

I found many great ideas thru my research that helped to inspire my Thomas the Train birthday invitations. Using my limited marketing knowledge and design skills, I designed a party invitation packet. First I visited a local travel agency to get some samples of tickets and travel itineraries. Then, I designed the following items

The envelope was yellow and blue. The front cover flap said “Anil’s Train Station” in a toy train font (i.e., little engine with coaches that each have letters on them), had a name box for each child, and said “Travel Documents and Itinerary Enclosed”. As you opened the flap, two Thomas engines were placed on each side of the envelope and centered in the middle were the words “Toot! Toot!”. The first insert was an announcement that read: “All aboard the Birthday Express to celebrate Anil’s 3 birthday! Your special boarding pass and travel itinerary have been enclosed. For up to the minute travel updates, log onto www.anildhaval.com.” The boarding pass had a Thomas centered in the middle. On the left hand side, I included the date, departure time, and station information. On the right hand side was the passenger name, section (3A, Party Section), and confirmation information. Finally, I included a travel itinerary in the envelope. It read: “Check-in at train station; Enjoy coloring and activity book; Lunch served in the Dining Car; Shopping at your leisure at The Shops @ the Tracks; Boarding call for rides; Enjoy birthday cake and ice cream; Pick-up your special package at Baggage Claim; for up to the minute travel updates, visit www.anildhaval.com”. I had these printed with a local printer (much like a Kinko’s in the USA).

I then created a web page for up to the minute travel updates at www.anildhaval.com. This way, passengers could confirm their attendance either my telephone or email. The web site was also a great way to give directions and a nice preview of what the children could expect at the Thomas the train birthday party.

I decided to prepare a “special delivery parcel”, essentially a party favor packaged in a brown paper to look like a post parcel. The package included several items – a Thomas and Friends book, a specially made CD with my son’s favorite songs, a personalized “Choo … Choo” school bag tag, a rainbow pencil with a train eraser, and the mandatory sweets. The CD jewel cover label was a photograph of my son on his Thomas train; the title was Birthday Express Celebration Tunes and was centered along the side of the photo. It also read, “With Compliments from Anil’s Train Station. A special collection of children’s nursery rhymes, dance tunes, and favorite classical music.” The actual CD label had an image of Percy the Small Engine, balloons, the title of the CD, and it read “Featuring: I’ve Been Working on the Railroad, Born to Hand Jive, Itsy Bitsy Spider, Alphabet Song, Vivaldi’s Four Seasons, & over 30 other songs!” Along the bottom it read “Anil’s Train Station, April 15, 2007”. The school bag tag also had train images and was personalized with each child’s name. I designed a baggage tag with trains, balloons, and the child’s name. I then laminated them at home using an iron and ID card sized plastic holders. I then punched a whole in them and put in a ring and clip that allows the child to easily hook it on a school bag. After wrapping each box in brown paper, I placed “destination Anil’s Train Sation” and “fragile: handle with care” labels on each box along with the name of the passenger and Thomas stickers. Staying in line with the Thomas the Train birthday station theme, I decided to feature two shops at the Shops @ the Tracks party area. One was a tattoo and body art parlor, and the other shop was a novelty shop. The tattoo parlor included tattoos of Thomas and Friends, Madagascar characters, Cars characters, Barbie designs, safari animals, and glow in the dark tattoos, friendship rings, body jewels, beads, and other small items. The novelty shop had items such as ball and jacks, racing cars, funny face stamps, railroad chewing gum, Barbie lip gloss, small toys, slinkies, and other small giveaways.

Prior to the Thomas the train birthday party, I made personalized gift certificates for the tattoo shop and novelty shop. I designed baggage claim tickets for each child. I also personalized Thomas party bags for each child to use as a shopping bag. I then gathered coloring pages and activity pages from the internet to make an activity book for the children’s table. I also took some time to create some original puzzles. For example, I created a search a word puzzle – “Birthday Conductor’s Friends”- that included the name of each child attending the party. The cover page was a photo of Thomas and other engines. I also placed the words “This Thomas and Friends Activity Book was Especially Created for . . . . with compliments from Anil’s Train Station”. I included a letter from the birthday conductor thanking all the passengers for taking the time to celebrate his birthday with him and for making it such a memorable day. I then had the pages printed at a local shop and bound with spiral, a clear plastic cover, and cardboard backing. I splurged for color copies of the cover page. As the big day arrived, I made signs for the train station. A “Welcome to Anil’s Train Station” with the Birthday Conductor’s photo to mark the entrance to the party. The day of the Thomas the Train birthday party, the children were greeted at the entrance with the “Welcome Sign” which had a large photo of my son as Sir Anil. I placed train tracks using black insulation tape along the floor of the Dining Car, in front of the Shops @ the Tracks, and along the check in counter and baggage claim counter. We decorated the station with typical Thomas and Friends decorations, plates, napkins, etc. However, for an added touch, I created areas to give the illusion of an actual train depot. The facility we rented for our Thomas the Train birthday (a pavilion located within our residential estate) had a great wrap-around porch that we used to set up the counters and shops. The check in counter was where the passengers first arrived. The “Check In Counter” sign asked for their boarding pass and identification. At this counter, each child received a gift certificate for each shop and a baggage claim ticket to retrieve the special delivery package as they departed for the day. They also received a Thomas shopping bag to be used for the shops later in the day. From this point, the children were directed to the activity table/children’s table to enjoy activities and lunch.

We decorated the children’s table with little people tables covered in yellow table cloths. The little chairs were covered in Thomas and Friends chair covers. Each place setting had a personalized activity book, a train whistle, and a Thomas conductor hat. I also placed four boxes in the Thomas colors (red, yellow, green, and blue) with crayons on the table. Each box was decorated with Thomas and Friends stickers. There was a Thomas painted board with a face cut out for the children to take photos. There was also a Pin the Number on the Engine game setup with the winning passenger being rewarded with a train shaped drinking cup. My son’s chair was decorated with a train shaped Mylar balloon and a “Birthday Conductor” sign on his chair. The Dining Car served grilled American style burgers with all the trimmings (which you can’t find in South Africa), potato salad, pasta salad, chips, dip, watermelon, strawberries, grapes, tiramisu, birthday cake, and two flavors of ice cream. The desert table had a wooden train track encircling the birthday cake which had a photo of my son on his favorite Thomas engine. As lunch wrapped up, the children enjoyed shopping. I set up two tables and placed the tattoo parlor sign and novelty shop sign above the tables. Each table had the merchandise displayed and the children could fill their Thomas the Train birthday shopping bags as they wished. I had a friend’s teenage daughter applying temporary tattoos and body jewels for the children, and her other daughter minded the novelty shop.

The highpoint of the Thomas the Train birthday party for my child was when the special birthday express train arrived. I hired a train with two coaches to give the children rides for the party. In addition, we hired a carousel and mini-Ferris wheel to round out the “Playland” at the station. After cake and ice cream, the children continued to enjoy the rides. As each child left, he made one last stop at Baggage Claim to pickup the special parcel.

It took a lot of time and energy to plan this Thomas the train birthday party; however, I found that I saved a lot of money by doing things myself and designing my own items. My child and over 40 other children really enjoyed the party. The parents also commented on how creative the Thomas the Train birthday party was, and they enjoyed themselves as much as the children, even taking a ride or two on the train.

Even the weather cooperated and provided a beautiful autumn April day (the season’s in South African are opposite of the States).

I hope these Thomas the Train birthday ideas will help to inspire other parents as much as the ideas of many creative parents helped me. My son truly had a beautiful time and that alone made all the late nights and trial and error samples worth every minute.

I have attached some PDF documents of the invitation and images of the items I reference above for your use. 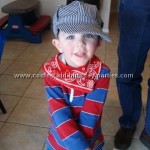 Birthday Traditions from Around the World