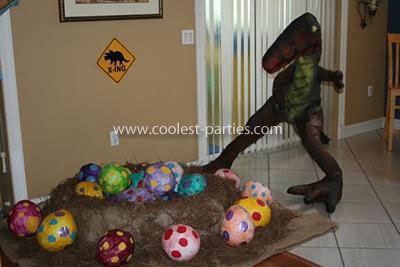 My daughter who was turning 3 wanted Dinosaurs as her theme. It was very difficult finding “girly” dinosaur party stuff so I had to make almost all of it. I knew I wanted a dig so I was in search for bones. Thankfully I have a rancher friend who found me some old cow bones. My husband created a large dig site area in our front yard with ADS piping and burlap (plus about 2 yards of beach sand). I used the cow bones (of course they were clean), sharks teeth, plaster of paris fossils and some plastic dino eggs as the “finds”.

I then decided to make a dino dive in our pool. That was the easiest thing. I just threw a bunch of plastic dinos in to the pool – duh.

For the other decorations I used more plaster of paris fossils, some of the cooler looking bones and a few large plastic eggs (hint-Michael’s after Easter).

I spray painted the eggs with stone spray and painted dots on them in different colors. I also paper-mached dino eggs as the party favors (most work ever!!!). I filled them with stickers, candy, tattoos and other party favor stuff. I used white copy paper as my first layer and then used colored tissue paper as the top layer. And then I painted dots on those too. My husband got a small inflatable pool and covered it with burlap and pine straw – voila! A nest!!!

For food I used the idea of a “Herbivore”, “Carnivore” and “Sweetivore” diet. That’s pretty self-explanatory. I then found a very cute must have watermelon carving of a T-Rex. Totally mastered that!!!! I then made chocolate lollies using chocolate molds shaped like dinosaurs. I used green, purple and brown.

I then used a Styrofoam cone (the biggest one they make) and spray painted “basil” green. I stuck each lolli into the cone and made it a lolli tree. It went along with the Sweetivore diet.

We downloaded some Dinosaur Ambiance sound effects and played it over and over and over again. I had a friend do the cake and couldn’t have been happier. I used a few different ideas and had her put them all together. We ended up having over 70 people but with everything that was going on it didn’t feel like that many. A total birthday party success!!! And YES I’m already planning next years bash.