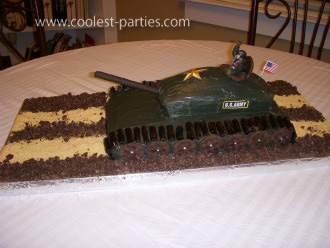 Where do I begin?

In the beginning there was Peyton and Carson, twin boys, and from the beginning all I could dream about after their birth was really cool birthday parties. I’ve always enjoyed decorating for holidays, arts and crafts, so what a better way to fulfill my artistic need than to do it through my kids parties.

So here we go… at the time of their upcoming 5th birthday, the boys were really into G I Joe, the movie was out and Snake eyes and Storm Shadow was hitting the box office. I felt a need to incorporate this theme into a party. The boys birthday is in October so we had already purchased the Snake Eyes and Storm Shadow costumes for Halloween. So, I was on the hunt for décor.

I went to a flea market and purchased helmets, camo netting, canteens, fatigues. I also found miniature army men, tanks, flags and all kinds of military stuff at yard sales and dollar stores. I went to the local army recruiting office and got posters for the walls, pencils, erasers, stickers, wrist bands in red/white and blue and shirt pins with “U.S.Army” on them – it was all free and made for great goody bags!!! I purchased a bag of medals and several play hand grenades at the local dollar store for games and also went to a local auto repair place and they gave me some old tires to use for an obstacle course.

First we started with the invitations. I went to a local party supply store and purchased regular G I Joe party invitations. The wording however I changed a little bit. I used an old type writer (still sitting in my office at work) The typing made it look a little more official. I looked for an old invitation at home to scan for you but couldn’t seem to find one so I’ll try to give an example of the invite below:

You are invited to a party for: Privates Peyton and Carson Richert

You get the gist of it. It just made for a great conversation piece.

Now, the cake. I have taken pride over the last few years of making the boys birthday cakes. We had a western theme party one year and I made a horse cake. I’ve made Ninja cakes, dragon cakes and so on. This cake was going to be a tank cake. I googled ideas (the internet is fabulous) and came up with a plan. I made the icing military green, the wheels were chocolate cookies, the tread on the tank tracks were made with black licorice, the gun barrel was a chocolate cereal straw, the ground was made with graham crackers crumbs and crushed chocolate cookies and last, I used one of the yard sale army figurines to protrude out of the top of the tank. It turned out fantastic and was quite delicious too!

Now that we have the invites out and the cake made, it was time to decorate. I made an outdoor sign out of three pieces of wood to read “Camp Richert” I made a typed draft list of all the quest names (Private Jackson, Private Katelynn etc.) and set up a table by the front door to check the troops in as they arrived. Each of the enlisted received “war paint” on the face, a helmet and instructed to proceed to the back yard.

Once everyone was in place we played “Hot Grenade” with the ticking plastic grenades we bought at the dollar store (the same principal as hot potato). I had used the tires and some orange cones we had borrowed from a friend who was in the construction business to set up an obstacle course in the back yard. We have a playground set in the back yard with swings, monkey bars and a little play house with a ladder, so we had the kids race around the cones, jump through the tires, climb the ladder to the playhouse, cross the monkey bars and back to the finish line (all while being timed on a stop watch). The kids were very competitive and enjoyed the “boot camp” training. At the end of each task, each child received medals (dollar store) and by the end of the day, the troops were sporting about 5 medals each. Last, we divided the kids up and used an old rope we had at home for “Tug of War”. The parents got involved and we ended up with a pile of kids on top of the adults. The kids really seemed to enjoy it. So, at the end of the party, after cake and presents and while the kids were still outside, I conned my brother-in-law to wear a Snake eyes adult costume I had purchased at Party City (29.99) and ride through the yard on his four wheeler. WOW! Talk about stunned!! The kids were speechless and the adults were about to die laughing!! What a treat for everyone! So there you have it – the birthday party that our neighbors and friends still talk about.

As a final “thank you” to all the patrons, I took a picture of the boys in their fatigues in front of the Camp Richert sign and I made thank you notes on the computer. What a nice finish to a nice party. Hopefully the boys will treasure the memories as much as I will.

So, on to the the next birthday, we have only a year to plan so stay tuned… over and out.