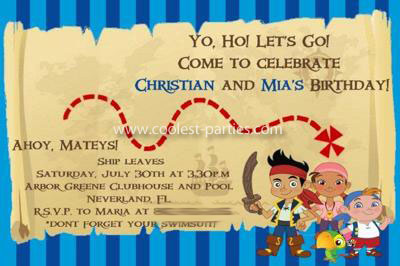 I wanted to have a combined party for my 6 years old boy and my 4 years old daughter because their birthdays are close and they both have the same friends. As you can imagine at these ages they both have already their own tastes and especially because of the difference in gender the problem was bigger. He wanted a monster truck party and she wanted a Barbie party. I wanted to have the party in the pool of our community, so I wanted a theme that related to the water.

Since summer started I noticed that they both were hooked to the new Disney TV show “Jake and the Neverland Pirates”. I started to look for party supplies, but there is nothing in the market yet with this theme, so I decided to start using my imagination and as I am very crafty it was very easy to come out with few ideas. I decided to pick a treasure map theme for general decoration and add the characters of the show as much as I could.

The invitations were done with the treasure map background and the show’s characters in the front with few lines here and there of the show, like “YO, HO! LET’S GO!” and “AHOY MATEYS!”. Then my next step was the pinata that usually takes me a while to build. But really, this one was not that difficult – it took me 3 days, but I spent a lot of time putting little details on it to make it look as much as possible as “Bucky” (Jake’s ship.) I told neighbors and friends to save paper towel rolls for me so I can create telescopes to give to the kids for the treasure hunt game. I painted them black and cut cereal boxes cardboard and painted gold for the top and bottoms.

I didn’t like the idea of a regular treasure hunt game with clues as I had too many kids and little ones, so I came up with an idea of a treasure hunt where you have to follow the instructions of the map. Those were all funny instructions like, ant steps (on your tip toes), frog jumps, penguin walking, alligator snaps and elephant steps. I put pictures of all those animals in the map and then a few visual clues between the instructions, like look for the parrot, the pirate ship, the palm tree and the mermaid. That’s when we used the telescopes to look for our clues. The parrot was made with cardboard and I stuck it in a branch tree, then the pirate ship was a miniature ship that I had in my husband office and I hid behind some bushes. The pool is all surround with palm trees, so that was a given and then I put a a Dora mermaid doll by the pool ladder.

The kids had a blast following all the instructions of the map and pretending to be pirates looking for clues and the parents loved to see their kids doing all the fun steps. Of course the best part was to actually find the treasure chest full of goodies for everybody. I filled it with beads, eye patches, party rings, little crowns, plastic gold coins, chocolate coins and pirates whistles. I forgot to mention that before we started the game I gave every kid a bandana to wear in their heads like pirates, along with the telescopes. My homemade creation that took the most time was the picture frame/water balloon target. I used a light wood board and hand-painted Jake and Issy with Skully (the parrot) and I painted a gold coin to have the hole done where the kids will put there faces to take their pictures and at the same time I used for the kids to throw water balloons to try to make it through the hole. It was a lot of work but at least it had to uses in the party as good as decoration in the pool area. 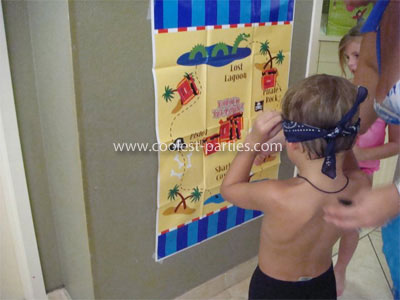 I found at an online store a game with a treasure map and the kids had to put the treasure chest in the X, so we played that too. 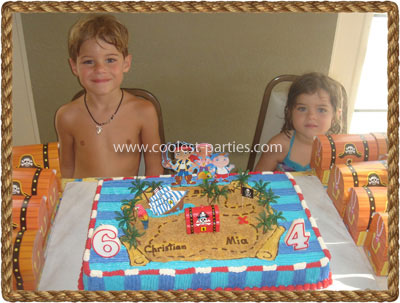 The cake was simple – a treasure map, and we used cookie crumbles with brown sugar, so it gave it the sandy look and then I printed a few images in cardboard like the characters and a parrot. I bought a wood ship and painted and I ordered a few plastic palm trees to put around. I found a treasure chest candle, so that came in handy.

As a thank you cards I used kind of the same idea of the invitation but I add the picture of the guest kid in the board that I made.

Everybody loved the party, I had a lot of compliments from the moms about the games and the decoration, especially the pinata. The kids had a blast in the pool and with the games and of course with all the goodies that they got from the treasure chest, the games prizes, the pinata and the goodie bag.

I had a blast putting it together and my kids enjoyed not only the party but all the 3 weeks before while I was creating everything. 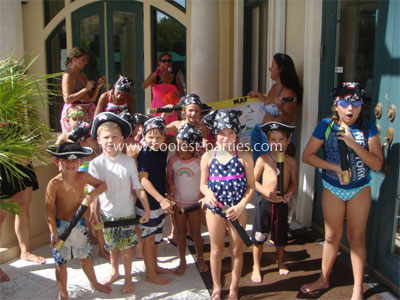 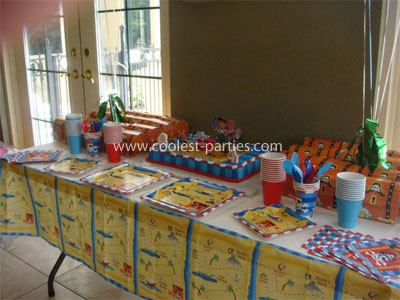 25 thoughts on “Coolest Jake and the Neverland Pirates Birthday Party”