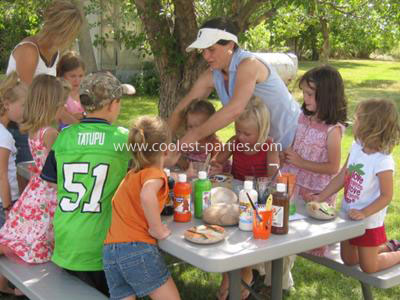 After watching Kung Fu Panda 2, my daughter was very excited about having a KungFu Panda party. Keeping her happy and working within our very limited budget gave us a very homemade yet exciting party for her friends from school. It also gave us lots of fun “projects” for the week leading up to the party.

Invitations: We made our own invitations and rolled them into scrolls tied with red ribbon as dragon scrolls. Some of them got squished flat in the mail, but most of them sent well. We used Word to write up the necessary information and add some clip art scroll designs.

Preparation: We planned for the Kung Fu Panda party to happen our in our back yard since it was forecast to be hot. We set up our camping tent and spent the morning of the party blowing up balloons. We taped a picture of Tailon (the bad guy from the first movie – we got the photo from googling free coloring pages) onto 15 different balloons that we amongst all the balloons covering the floor of the tent. We set up our paint table with rocks that we gathered from around our yard. If rocks are not in abundance, paper plates would have worked well too. Tempra paints, brushes, and coloring page pictures of Po and the Furious Five were set out with the rocks to paint and googley eyes in various sizes as a finishing touch. We also set up our KungFu Challenge Course by arranging 2 courses side-by-side. Each course had 5 rocks (towels could also work) in a row as stepping stones. Then 4 tent stakes were pounded into the lawn to make an 18 by 36 inch rectangle. Medium weight string was loosely wrapped around each stake. That was our Chinese Jumprope part of the challenge. The sprinkler was set in place and a bucket was filled with 40 water balloons. On the side of our garden shed we used washable paint to paint a smiley face target for each course. Then we set up 12 cups with chopsticks in them and 2 cups that were half full of chow mein noodles. Party supplies were set on the table and my daughters favorite punch was chilling in the refridgerator (Equal parts orange juice, pineapple juice and Squirt).

* Rock Painting: As guests arrived, we began painting rocks to look like the faces of the furious five.

Viper and Tigress were way more popular than the panda and some kids did 2-3 rocks. It was a nice flexible activity as people arrived at bit different times. After their painting projects were set out to dry, they went to the tent to attack Tailon.

* Tent Attack: Limiting the number to 2 children inside the tent at one time, they had to go through the balloons to find Tailon, then “KungFu” the balloon however they wanted to, to pop (kill) the bad guy. A big audience gathered outside the balloon windows cheering each other on.

* Kung Fu Challenge Course: We divided into 2 teams for the KungFu Challenge course. They had to first cross the stepping stones. Next, jump inside the Chinese Jumprope Box and jump the following pattern: In, Out, In, On, In. In means both feet inside the rope. Out means both feet outside the ropes – one on each side. On means to jump so that your feet land on the rope. Then they did 5 pushups, ran through the sprinkler and threw a water balloon at the face on the side of our garden shed. Then the next team member started. The kids kept going back and trying again till the water balloons were all gone.

* Feed Po a Cookie: (pin the tail on the donkey variation) The poster board of the big panda was set up on our step ladder and each child was given a cookie. They were blindfolded and had a buddy to call out directions to try to get the cookie to Po’s face.

* Chopstick relay (we were running short on time and skipped this, but since we had it all prepped, I’ll share): Divide into 2 teams and sit close to each other on the ground. Give everyone a cup and chopsticks. Fill the first person’s cup with the chow mein noodles and talk about how to use the chopsticks. Using sticks, they need to get move the noodles from their cup to the cup next to them till all the noodles passed from one end to the other.

* KungFu Freeze: a bonus game that I really liked but I didn’t get the music downloaded ahead of time. Play music from the movie while everyone dances and practices their KungFu moves. When the music stops, everyone has to hold their pose like a statue.

Could be competitive by being “out” if you bobbled in your pose, but is also okay to point out some really good poses and start the music again. If you go that route make sure you encourage each child. To prepare, we made the pinata using a balloon covered in newspaper strips that had been dipped in a flour/water paste. After that dried, we popped the balloon and did another layer of newspaper in the paste. When that was dry, we used duct tape to attach a medium weight rope to the inside of the pinata. We filled it with candy and then used masking tape to cover the hole and to shape ears. My daughters (soon to be 7, 4, and 3) had a great time painting the pinata white for the face of Po the Panda.

After the paint was dry (we did a bit on each of 4 days), the birthday girl used a black permanent marker to draw the face on the pinata and it was ready to go. She also drew and colored the panda that we used for the “feed a cookie to Po” game.

* The Activity with Kung Fu the Panda Pinata: We passed out dragon scrolls that each had a number on them. Whatever number was picked was your order for attacking the pinata. It had lots of candy in it and was pretty heavy, so we told them to be prepared for pain if they wanted to hit it with their hands. The best choice would be to kick the pinata, and we practiced a few kicks before everyone sat down in a big circle around the pinata. We had made the pinata pretty strong, so every child got 2 tries before candy flew anywhere. At that point, we passed out goody bags so that the candy could be added right away. We did have extra to give a few kids who didn’t get much.

Cake and presents: It was almost time for parents to come back, so we came in the house and immediately served drinks since it had been pretty hot outdoors. Sung Happy Birthday and opened presents while we cut and distributed cake. Children who had to wait longer for their parents (or for their parents to talk to me) went back into the tent and tried to pop lots more balloons. We used the same face pattern to decorate the cake – a 9 in springform pan covered in white frosting and decorated with oreo crumbs and fudge to be the black patches around his eyes, also his nose and mouth. Ears were simply oreos put in place.