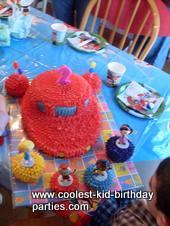 For my daughters 2nd birthday she wanted to do Little Einsteins. I figured it would be easy to find party supplies, but I was wrong. I ordered what I could then made the rest.

For the Center Pieces I printed out some Little Einstein Clip art, cut it out. Glued it to a stick then stuck them in a Styrofoam circle. Glued some tissue paper around it making it look like a opening present with the little Einstein’s coming out of it. It was a hit.

For a game I played pin the baton on Leo. I just printed out a picture of Leo then cut out a bunch of Batons and played. It was cute. I also cut out pictures of Rocket from a card board box which were big enough to hang on the back of each child’s chair. So it made it look like they were all in there own rocket. It was a lot of work but super cute.

For the cake I took a turkey pan for the bottom, it took 2 boxes of cake mix. For the top I used an 8 inch round pan. For the back of the rocket I used 2 cupcakes. For the stands that the Little Einstein’s are standing on it is 2 full cupcakes and the other one is a full cupcake cut in half. Everyone loved it. 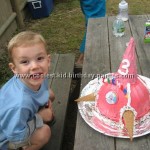 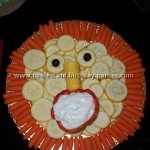