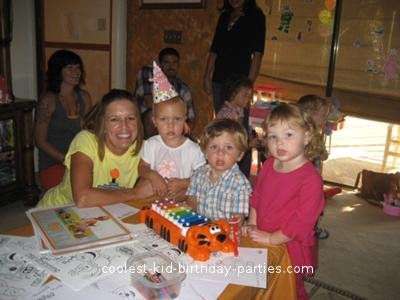 My daughter loved and still loves Yo Gabba Gabba. She wanted a Yo Gabba Gabba birthday party for her second birthday. I ordered invitations that had my daughters picture uploaded into them as DJ Lance. I found these the cheapest on eBay. Then I photoshopped the picture of her as DJ Lance onto labels that said “Thanks for coming to my party!” for her goody bags.

I downloaded lots of printables and cutouts from the NickJr. site. When the kids first got there, I had a table setup with crayons and the printables for them to color.

I bought generic party hats and bags at the dollar store. I printed the characters from the NickJr. Site on heavy paper and glue gunned them on the party hats and bags for goody bags. I also used the cutouts for window and wall decorations.
I made eyes from all the characters on the computer and printed them out on labels. I then cut the labels out and stuck them on helium balloons of the characters color, i.e. – Brobie on green ballons, Foofa on pink, etc.
I bought labels and balloons at the dollar store.

Yo Gabba Gabba Decorations and Activities

I bought a cheap bean bag game at Toys r Us and covered it with green foam board. I then made a Brobie out of the foam board and glued it around the opening hole. I used felt to make food to glue on the bean bags that came with the game for the “Yummy in My Tummy” Bean Bag Game.

I used a trifold project board that can stand up by itself and painted a Foofa picture from the website on it. I used poster board and painted a Muno. I then cut out numerous eyes and they played “Pin the Eye on Muno” game.

I put up my daughters little ball pit outdoors by our swingset and had all the games outside on the patio and in the yard. As they were all about 2 years old, I didn’t organize the activities, but let them play whichever ones they wanted when they wanted to.

We had pizza outside (the easiest and cheapest food!) and then went inside for cake and cupcakes.
As there are not many places that do Gabba cakes, I made individual cupcakes with Gabba cake toppers from eBay. I also placed 20 cupcakes together and iced them like cake with Muno for my daughter to blow out candles from.

The party was such a hit, that she wants the same party again!