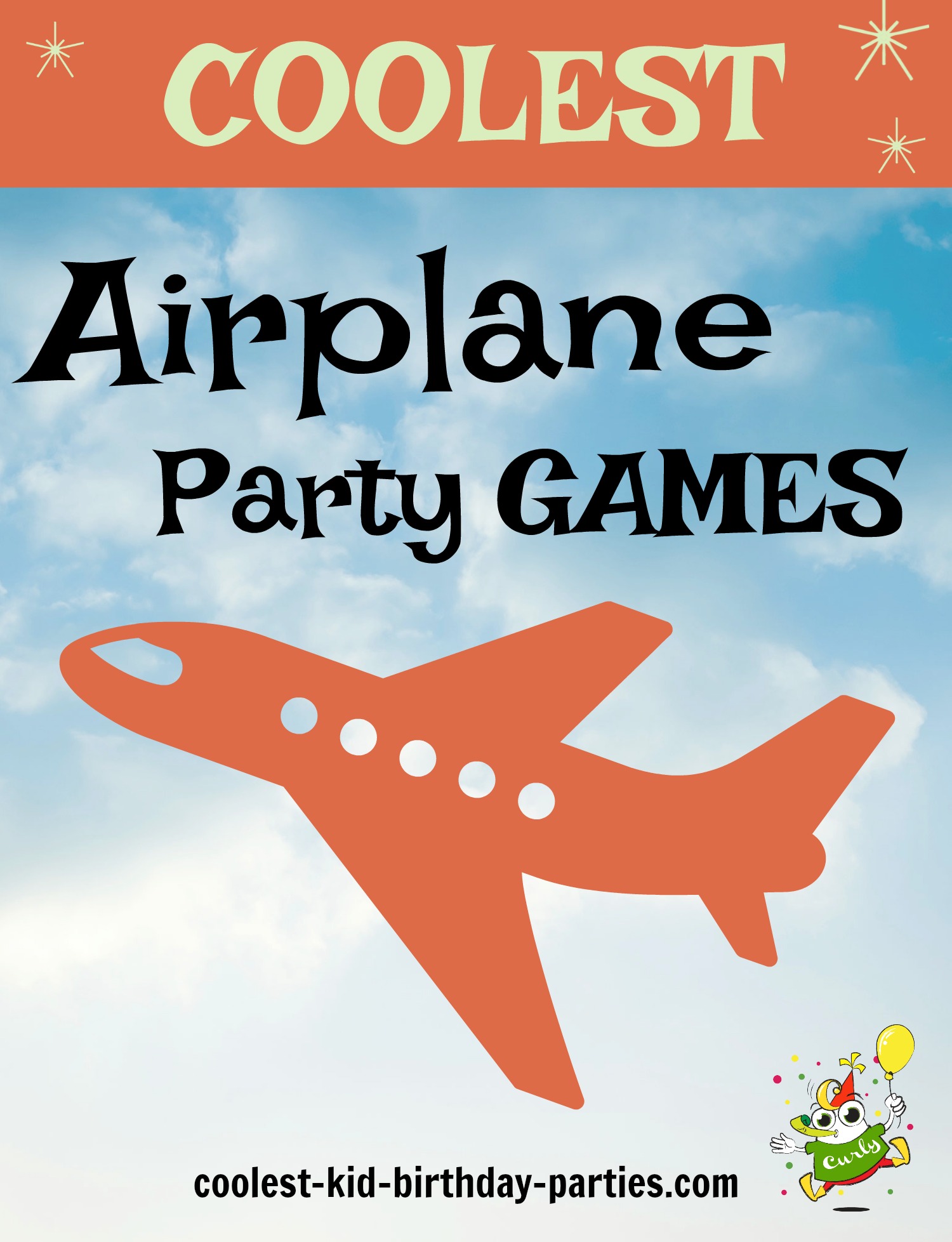 For this airplane party game hang different size hula hoops in the air and have the kids throw their planes (either paper planes, or plastic planes… whatever you have) through the hoops. If you can’t hang the hoops, place them on the ground and have the kids land the planes in the hoops.

Pin the Pilot on the Airplane

Before the party, print out a few printable airplanes and tape them to a larger page or wall (you don’t have to print out more than one, but it could be easier for the kids if you print out a few – it gives them more options for pinning their pilot on). You can also use an airplane or jet poster instead. If your child has a pilot costume, photograph them in their costume, blow it up so that it’s a bit larger, and print your child’s picture (if you’re using our printable airplanes, you only need your child’s face with a pilot hat on to be photographed and cut out, since the kids will be pinning the pilot in the pilot window of the airplane). Make enough of these for each kid and even more if kids want to take more turns. Also take tape and put on the back of each. At the party, give each kid their own pilot (with their initials on it, so that you don’t forget who pinned it), blindfold each kid one by one, spin them around, and let them try and stick your child’s pilot picture onto the jet or airplane. The closest is the winner.

Another variation of this airplane party game is “Pin the Airplane on the Map”. For this you will need a large map of the world or of a specific country. Print out our printable planes for the kids to pin on the map. Your home country or town can be the target.

This is a fun relay race that calls for some balancing skill (what you need in order to be a plane steward/stewardess). For this airplane party game race, divide the kids into teams (could be two and more). Give each team a serving tray and 2-8 plastic cups (the more cups, the harder it gets) to put on top of the tray. Have each team stand in a single file line. Determine a turnaround point for the race. On the mark of “GO”, the first person on each team needs to walk to the turnaround point while they’re holding the tray without dropping any cups. When they return to their starting place they hand the tray to the next person in line. The first team to have all players give a try is the winning team!

Create stations for countries you choose. For example a station for the USA, a station for Mexico, a station for France, a station for Italy, etc. Decorate each station in the county’s colors and objects that signify that country. All of the kids “fly” together from station to station (around the world) and play a different game or create a different craft in each station. For example, when they get to the Mexican station, you can all play the Mexican Hat Dance game, or make maracas. It would be great to create passports before you start traveling around the world (in our ice-breaker activities we explain more about the kids making their own passports).

Before the party hide little parachute characters around the house or party area. At one point tell the kids that several animals had to parachute out of a plane and are now lost. Tell the kids to find the animals and the child with the most critters wins.

Before the party, draw and cut out a large circle from a piece of cardboard (this will be used as “target” during this airplane party game). The bigger the hole, the easier it will be for the kids to throw in their planes, so you may want to have a few different types of targets – one for the bigger kids with a smaller hole, and one for the younger kids with a bigger hole. Take the target and prop up on a table or chair (make sure nothing is covering the hole). On the target write your hometown (that’s where you want the kids’ airplanes to fly). A distance away from the target, tape a piece of paper with a name of a country that is not so far away from your hometown. Take masking tape, and tape a semi-circle around the target in that spot of the country. A few steps farther, tape another piece of paper with the name of a farther country, as well as a semi-circle around the first semi-circle. Do this about 5 times. At the party, the kids are given a chance to fly their paper airplanes from different places, i.e close and far countries. This can be played as an airplane party game where one kids tries in the closest spot, if he makes it in the hole, he gets another try in the 2nd closest spot. If he misses the target, he gives his turn to the next kid, and this goes on and on, until the same kid has a turn again and continues the game from the spot he was on. The game ends when one player succeeded through all locations.

Well Its just like hot potato. You sit the kids down in a circle and give them a paper plane or a toy plane and start the music. When the music stops who ever is holding the plane is out and the game will continue til there is only one kid left…

Assign a table where kids can fold all kinds of paper airplanes (don’t forget to check out this cool site for all kinds of ideas). You can put colored pencils, marker, stickers, crayons, etc. for the kids to decorate their paper airplanes. If the kids are too young to fold their own paper airplanes, create many before the party starts or have and adult make them. You can have various contests with these paper airplanes: such as, highest flight, closest to a target, longest flight, best crash, most flips, largest flip, etc. Provide many categories to allow each kid to win a prize during this airplane party game.

Cut out clouds and place them in a circle so the children have enough room to walk around them (you need to place one less cloud than the amount of kids there are). It’s best if you tape the clouds to the floor. Everyone stands on the outside of the clouds (make sure they aren’t stepping on them yet). Put music on (you can use something that has to do with your theme, like music from Top Gun or Jay Jay the Jet Plane, etc.) and let the children walk around the clouds. As soon as the music stops, the children have to sit on one of the clouds. Whoever isn’t sitting on a cloud is out. Then remove a cloud and continue the game until one child remains who ends up the winner. Instead of clouds, you can tape airplanes to the floor and have this airplane party game be “Musical Airplanes”.

This airplane party game is best played in a large open outside area. Create a runway using masking tape, chalk, cones, etc to mark the boundaries of the runway. The runway should be around 50 feet long and 10 feet wide to allow enough room for the pilots to maneuver themselves through. Disperse non-breakable items, like sports balls, bouncy balls, inflatable objects, empty bottles, tin cans, clothing, small handbags, toys, blankets, etc. (these items are going to represent other planes on the runway). Have each child pair up so that one child will be the pilot and the other will be the air traffic controller. The air traffic controller needs to guide the (blindfolded) pilot down the runway without running into any other plane (non-breakable items). The air traffic controller cannot touch the pilot and guide him only by speaking. To start this airplane party game, the first blindfolded pilot stands at the beginning of the runway with his or her arms stretched out like a plane. The air traffic controller can stand anywhere he or she chooses (it’s best if they stand right behind the pilot – this eliminates confusion with right and left commands: “go to the right”, “go to the left”, etc.). The air traffic controller guides the pilot down the runway and uses commands like “One step to the right”, “Two steps forward”, “Three small steps to the left”, etc. If the pilot bumps into anything (crashes), the next team takes their turn. The team that gets the farthest is the winning team (although it’s best to award all your pilots with small prizes, no matter how far they “fly”). Note: every take, try changing the places of the objects – so that the kids don’t memorize where to walk.

This classic game may be more suitable for the young ones (the original game is “Duck, Duck, Goose”). The kids form a small circle and all sit down. One person is it and he walks around the outside of the circle, touching the other children’s heads saying “pilot”, “pilot”, “pilot”, until he comes to the person he wants to be chased by, which he calls “PLANE”. The plane flies around with arms wide open and chases the player around the circle and the one who reaches the space first sits down, and the other one is it.

For this airplane party game relay race you’ll need a suitcase and a pile of clothes for each team (don’t provide too many clothes because you don’t want the suitcase to be too heavy to carry). Have each team stand in a single file line. On the mark of “GO”, the first person on each team needs to put the clothes in the suitcase, zip it up and walk a designated distance and back carrying the suitcase (you can put an object like a chair a distance away, so that the kids can run around and back). When they return to their starting place, they must open the suitcase and dump all the clothes on the floor for the next person to “pack the suitcase”. The first team whose players have packed the suitcase is the winning team.

Every plane has a black box. For this game, you can take a regular box or cardboard box and cover it in black paper or spray-paint it with black spray-paint. Then play this game just like the classic game “Pass the Parcel”. All of the kids sit in a circle and when the music starts they pass the black box around. When the music stops, the kid holding the black box gets to choose a prize. It’s best to do this until every kid gets a prize.

Take a look at our complete Airplane birthday party section for more of the coolest party-planning ideas. 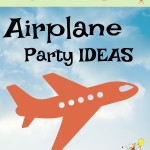