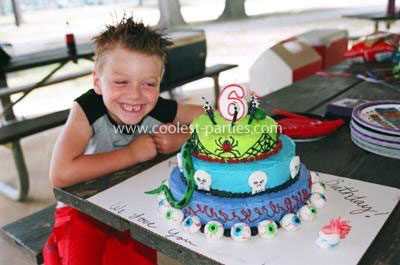 My son was turning six and was at the stage where all things gross, creepy, crawly and slimy were really cool! He is my little nature lover and likes all kinds of animals and critters including the ones that a lot of people find creepy. He’s very tenderhearted and even gets upset if we exterminate the black widows in our garage. He wants us to trap and release them elsewhere! We wanted to throw him a party that featured creepy critters and was inexpensive.

First we chose the location which was our local public park. The park has a water playground so we informed everyone to bring bathing suits. The fee for the covered picnic tables and water fun was about $30 dollars total. Then I purchased the party supplies. Instead of a bunch of expensive themed party supplies, I chose to buy one pack of fun printed plates and napkins for the children and went with solid colors for the rest of my items. Since the cake was rainbow colors I chose my son’s favorite color, red, as well as lime green, blue and black. Also, since the cost of party favors can add up quickly, I chose to buy a number 6 pinata and filled it with a giant bag of mixed candy. I gave all the children red glitter bags to gather the candy in and then take home. The total cost of the supplies which included helium balloons was about $30 dollars as well.

The cake was so much fun to make! It is not often one gets to craft snakes and eyeballs out of fondant. It is just like using modeling clay. I sketched the design which included 3 tiers. I also dyed the cake batter with food color so it was neon colors on the inside as well as the buttercream icing.

For the bottom tier I piped red flames and crafted fondant eyeballs. The eyeballs were simple to make. I just rolled the fondant into a ball and painted on the details using food color and a new paint brush. The second tier had white skulls. I made a paper stencil, laid it on top of a flat rolled sheet of fondant and traced around it using a toothpick to punch little holes like perforated paper. After I pulled the skulls from the sheet, I used a little water on my finger tip to smooth the edges. Then I dipped the toothpick in black food coloring to put on the details. On the top tier I piped a web design and spiders. And for the finishing touch, I colored fondant by mixing in green food color and rolled it into a snake shape. Then I painted on a diamond pattern using black food color and draped it around the cake. I added red eyes and a tongue using icing and a small tip. To speed things up, before we placed the fondant items on the cake, we used the oven’s warming drawer to harden the decorations quickly. It took about 30 minutes on low. The total cost for the cake supplies was about $20 dollars.

Since it was his birthday, we let our son look wild as well! He choose to spike his hair and dye it red with wash out hair color. We also bought him and the other children temporary tattoos of snakes and spiders.

After we let the children play on the slides and swings, we ate the cake and ice cream, opened presents and busted the pinata. Then we let the children play at the water park for a couple of hours. Before our guests left, I let each child choose a helium filled balloon and asked them what they wanted me to draw on it. The boys picked ninja faces and the girls wanted princess kitty cats. The designs are easy to draw using a sharpie. To my surprise, the balloons were everyone’s favorite part of the party! The children loved whacking the evil ninja balloons. Even after we returned home, my son and daughter played with the balloons more than the new presents! Now I bring a sharpie to every birthday party!

Basically for about $80 dollars we had a super fun and affordable creepy crawly birthday party. To this day our friends and family say it was best birthday party they have been to and ironically it was the cheapest one I have thrown! It just goes to show you, one does not have to spend a lot of money to have a great time! 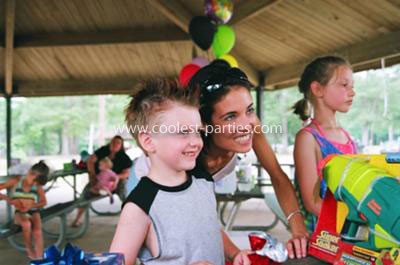