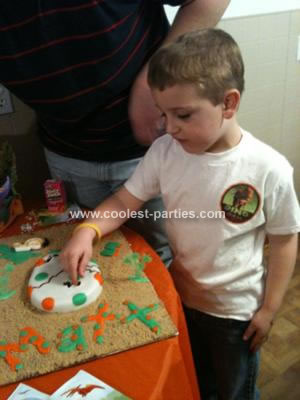 For my son’s 5th birthday, we chose to go with the dinosaur birthday party theme. I created invitations by printing the party info on an egg and using a cracked looking top half (attached with a brad), it read “BREAKING NEWS… DINOSAURS HAVE BEEN SPOTTED AT MATTOSAURUS’S CAVE” and once you lifted the top part of the egg, the details were inside.

At the party, the driveway was colored with chalk and large dinosaur prints led up to the house. At the entry, I created a large sign that said “Welcome to Mattosaurus’s Cave” “Enter at your own risk!”

The decorations used were large inflatable dinosaurs along with tableware purchased from Oriental Trading. Each child received a favor which was a variety of fun, dino themed items in a plastic dino mug. As the kids arrived, they were led to to the “Prehistoric Playhouse” (AKA My Son’s Room) to play with dino toys and coloring sheets that had been laid out. There were dino prints taped to the floor in a path to each event at the party.

The hallway to his room was decorated as a cave. Tan butcher paper covering the light and each of the doors created the dark illusion of a cave and green crepe paper was hung to create vines. Small dinosaur ceiling-hang-downs were also placed in the cave and other rooms involved.

As the kids played, my husband called them to the bathroom to choose and have a dinosaur tattoo applied. There were also dinosaur shaped chicken, white cheese sticks (dino bones), dino juice (mint chocolate chip ice-cream and Sprite), and fruit snacks in the shape of a dinosaur available for the guests to snack on along with small juice boxes and bottled water. Once all of the guests had arrived, the kids followed the dino prints to a sand table placed in the living room area. As they watched Dino Dan, they were given a Paleontologist Kit (filled with a shovel to dig “fossils” or assorted dinos and toys from under the sand, a paint brush to dust the sand off, a magnifying glass to look over their “fossils” closely, and a brown paper bag to keep their items in so that they could take them home). There was a sign behind the sandbox that said “DINO DIG” “Find 5 fossils to take home with you”).

After the dino dig, the children were asked to sit on the floor of the same room while my son opened his gifts. After gifts, the kids followed the dino prints to the kitchen to eat cake. I made him a personal cake which was a white dino egg, with green and orange spots and a chocolate line painted to resemble a cracking (hatching egg). Around the cake, I covered the board with brown sugar to resemble sand and placed a few plastic trees along with his name cut out in green and orange fondant. The cake for everyone was purchased and made up of cupcakes with two dinosaurs and a volcano on top. After cake, the kids stood around a table in the kitchen in which there were 12 miniature volcanoes (I made them out of play-doh around a plastic cup and painted brown with brown sugar (sand) around the base along with two fake trees and a plastic dinosaur). Each child was given a separate cup of vinegar colored with red food coloring. On the count of three, they each got to poor their liquid into their volcano and watch it erupt.

Finally, after the eruptions, the kids moved to a dinosaur pinata filled with candy and small dinosaurs. I purchased a pinata intended to be hit but converted it into a pull string pinata to better fit the age group. Rather than creating one in which one string opens the pinata, I chose to tie each string so that the kids all pulled on the count of three and they all won. As they grabbed up the prizes, they were given small brown bags to put them into.

The party was a blast for all of us involved, kids and adults and my son was so very pleased!