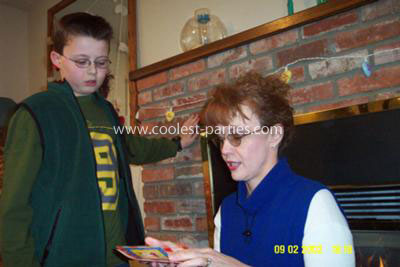 My son was turning 10 years old. Our family had really gotten into doing parties by now. It was like a contest, who could do better party. My son’s birthday is Oct 29th and I thought a Haunted House Birthday Party would be fun. I spent probably two years preparing for this party.

INVITES were elaborate. They were two and one half pages long with information I had gotten off a Haunted house site, and applied it to ours house. I purchased Halloween printed card stock. I brought a pumpkin for each guest and gave them along with invite and they were to carve out the pumpkins for a contest. Everyone was asked to come in costume and everyone did, except my elderly mom. INVITES: (last name on top) with Haunted House. Standing in the middle of the twenty-two hundred block (our street), you will find yourself staring at (our address) know to all as (LAST NAME haunted house). Tonight is October 29th, All Hallows Eve, AKA Halloween. The night rumored to be the spookiest night of the year, when ghastly ghouls and evil come together for one big fright fests. It goes on to tell things such as: 12 pumpkins, and gravesite with their names and cute little saying like U.B. NEXT, IZZY DEDYET, M.T.Tomb, C.U.Soon.

I signed the invitations with “It’s Halloween” and I sending you my best Witches”. In front of the house was a huge spider made out of garbage bags and of course a huge spider’s web. A caldron was on the steps with all the stuff in it and a live witch to open the door too! We had put up a Frankenstein with bags and he was sitting on the stairs going to the front door and every time I pulled out of the drive way I had to look to see WHO was sitting on our steps. That took some time to get use to.

DECORATIONS: As they arrive there were some things scary in the card board coffin (chicken bones and candy, ring fingers and more) p.s. cook the chicken bones or they will begin to smell. I got the coffin free after Sam’s sold all the candy it held. It was about a child size coffin. The kids were then told to hurry, hurry, and move on. This kind of puts some fear in them. My SIL was the MAD DOCTOR with the needle that looked like it could be used in an elephant. They would go to the Chemistry LAB she had with (food items) such as: Eyeballs, Intestines, Live Skin, Fingers, Teeth, Brains, a Hand and Bones. We used Crushing bones under a rug as they enter the next turn was fun too (of course they were only pretzels). I played scary music like “It’s Hallowee-en” which is noted in their invite preparing them for a scary adventure to come.

ACTIVITY: Black lights were used. They were bats and the eyes lighted up. One had to walk down and under to go through the first passage and then stand up and they were black rubber bats about face/head level when they would then stand up. Through the rest of the maze they would find hanging bones. As they move on there would be a trick section to where someone would grab them with their hands through two holes. Of course there will be lots of spiders and some even running across the floor. There was a ghost hanging and every time the door opened it would move. Each kid was handed a Halloween Flash light to guide them through the maze. (This would be one of their favors). At the end my friend was dressed as mummy and would grab them. I had gotten one of those huge Beer sign free from a little grocery store, that had the sexy witch sitting on a pumpkin at the end. My SIL was a beautify mummy, I was the witch, and us adults had a blast. My SIL would run up and back the side making sounds.

FOOD: (table decorates) Then they will exit the door into the house. Which would have a Halloween theme decorated and where the food would be at. Halloween printed table cloth with juice that had dried ice in a pumpkin. Cake that oozed out what looks like a bloody bat when cut. Jell-O that looked like a brain, Hobgoblin Goblin stew and Mummy cookies. Punch always must have a special name like “Bug Juice”. I put Ice cubes with raisins to make it look like a bug in their drink. Another name, Witch’s Brew or Ghostly green brew. A little black coffin filled with candy. Black and orange balloons are a must.

GOODIE BAG: Goodie bags are traditional – we used boo bags and put in Halloween erasers, pumpkin tic tac toe, shoe ties that go on the shoe laces. Plus candy, did I say candy……? I picked up fabric off season at JoAnn’s and made a pillow cases. Purchase a yard of fabric and sew the bottom and one side. Turn over top ¼ inch and iron then turn down three inches iron and sew. These dual as pillow cases and trick or treat bags. For the home group they got animated figured of Halloween, the boo bags, special bat plate.

GAME: We used Halloween candy. The kids can’t say anything like: witch, ghost, pumpkin, or they have to give back a piece of candy for each time they say one of the words, to the person they say it to. The one with the most candy wins a prize (something spooky of course). Hopefully not toooo scary.

Note: I did not do it scary, however, the kids from school thought it was scary. We did this inside our garage. Used black plastic that you use to keep the weeds out of gardens. THIS party went down as the best. My son was 18 last year and family wanted me to do something. So I used left over items and did a simple Halloween party. My son wasn’t impressed but the family had fun one time again. He obviously thought he was too old for parties any more. I miss those days, I had so much fun, we did safari, hot tub (fishy) party and lots of Disney ones. He hasn’t done a party since he was 11 years old. 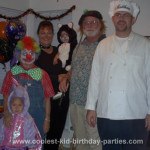