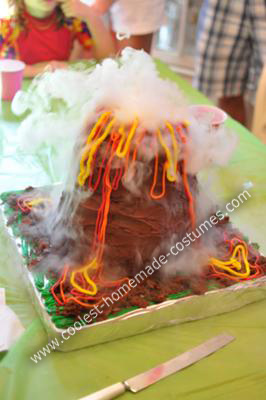 We created an Island Party theme for my daughter Keiran’s 5th birthday.

First, when the kids arrived they made hibiscus flower hair clips from tissue paper. Here’s how you create them: cut the paper into squares about 4 inches x 4 inches, stack 10 or so pieces together, accordion fold the stack, wrap a pipe cleaner around the middle of the accordion folded stack, and peel each individual piece of tissue paper apart to make a flower. Then wrap pipe cleaner around an alligator hair clip.

Next, the kids did coconut bowling. We used a set of children’s bowling pins we already had, bought a coconut, and they rolled the coconut to knock down the pins.

Then they played sprinkler tug of war. We set up the vertical arc sprinkler in the backyard, and put a large rope over it. We split the kids into teams on either side of the sprinkler. The goal was for each team to pull the other team past the sprinkler. It was about 100 degrees outside, so everyone had a great time getting wet while they pulled!

After that, we did a scavenger hunt. I made clues ahead of time with little poems in them and put the clues in plastic baggies. I then hid the baggies with the clues in the children’s sandbox in the backyard. Each child had to pick out a clue, read it, and then go wherever the clue told them to go to find a special island surprise! We hid the surprises all over outside and inside the house. The surprise was a pack that included a grass skirt, lei, 2 flower bracelets, and flower-covered coconut-type bra.

Then the kids just played outside in the pool we had set up, until dinner was ready. For the meal we served the Java Island Volcano Dinner, which consisted of piling the following items all together to make a volcano: rice, chicken, gravy (cream of chicken soup & chicken stock), chow mein noodles, celery, tomatoes, cheese, scallions, almonds, pineapple, coconut.

We capped the party off with cake and ice cream… a volcano cake that actually erupted!

Here’s how I made the volcano cake: I made a chocolate layer cake using two 10-inch pans, two 8-inch pans, and a 7-inch glass dish in my kitchen for the top. I stacked each layer and sculpted it to look like a volcano, cutting a hole in the top 2 layers for a long skinny plastic cup, and then inserting the cup.

Then I frosted it all, using the pieces that were cut out as lava rocks along the bottom of the cake. I also used green frosting as grass underneath the lava rocks, and red, yellow, and orange frosting piped around the top and sides to look like lava flowing down.

Finally, I mixed strawberry jello according to the directions and poured the warm jello into the cup inside the cake. We dropped in pieces of dry ice, and voila, the volcano erupted with awesome smoke and red strawberry lava bubbling over and down it! The kids and adults alike thought it was great! 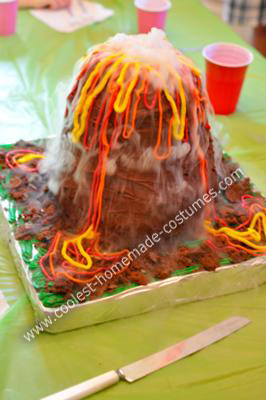 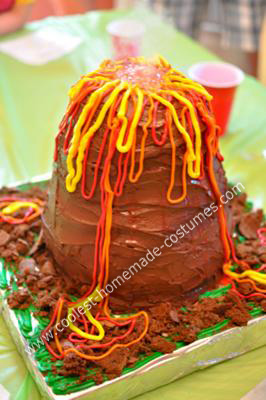 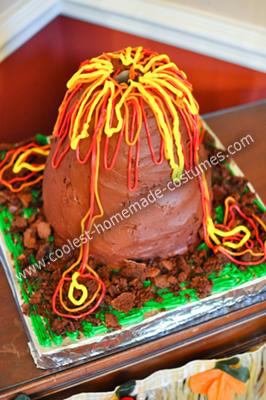