Choose two teams with an even number of kids on each team. Designate a starting line and a finish line about 10 feet away. Each group of players lines up at the starting line. The first person in each group is given two toothpicks. Each team has two bowls, one filled with ice cubes (royal diamonds) – one for each player – and another empty one that is placed at the finish line. Once you say “GO!”, each team tries to pick up the “diamonds” with the tooth picks and race to the bowl at the finish line. If a diamond falls, it has to be picked up off the floor with the toothpicks. After each player drops their diamond in the finishing bowl, they race back and tag the next player who then goes. First team to get all their diamonds in their bowl wins!

Here’s on of the coolest and most simple kid games. The kids put on red lipstick and are blindfolded and spun around, then they try to kiss a picture of a prince (or a picture of a frog! :-). Whoever is closest to the prince’s mouth wins. If you don’t want the kids dealing with any lipstick, you can print these free printable Princess lips.

In this relay race, kids dress up in royal attire and race to the finish line. You can even separate the two groups into Princes against Princesses. Each group will have oversized clothes that match their title. For instance, the Princesses will have a gown, high heels, necklace, wig, sunglasses, crown, etc. Determine a starting line and a turn-back line about 15 feet apart. Place each set of clothes in a separate bag or suitcase. Place the suitcases at the start lines.

Divide the players into two small groups and line them up at the start line. Blow the whistle or say go! The first players in each line open the suitcase and put on the clothes. They then shut the suit case and run to the turn-back line and then stop, take off the clothes, put them back in the suitcase and carry the suitcase back to the start line where the process starts all over again with the next person. The first team to finish wins. The more clothes you add, the funnier it gets! This can be one of the funniest kid games (especially if you can convince the boys to dress as Princesses and the girls as Princes :-)

Before the party hide plastic or chocolate gold-covered coins throughout the party area. Explain to all of the guests that the “Royal Treasure” has been hidden all over the land by naughty little pixies. The kid’s royal assignment is to find all of the the coins and place them back into the Majesty’s royal treasure box (this can be a gold spray-painted shoe box).

Everyone sits in a circle and passes a slipper from one person to the next (while music is playing). Someone calls time or stops the music and the person left holding the slipper is out. Continue until there is only one person left. You can also use a different twist of “Princess and the Frog Passing Game” – where all the guests pass a frog around the circle.

This is a fun activity and one of those really cool kid games! Call everyone into the ballroom and start playing Princess-themed music. The kids dance when they hear the music and every time the music stops, all of the kids need to freeze. Whoever doesn’t freeze is out. The last one to stick around is the winner. (Most children love this game, it lifts up their energy and sometimes it doesn’t need to be a game of taking people out, they might just love the activity of dancing and freezing).

This is one of those kid games that has a royal history. During the late 19th century each woman guest was invited to hold a handful of sand and let it sift through her fingers to find a precious gem left in her palm that was hers to take home. You can set up a similar game by getting a shoe box filled with clean sand or white cornmeal and bury inside a few plastic rhinestones. Make sure to introduce the game by telling the kids the story about 19th century parties and have the Princesses and Princes take turns until they all have gems.

Divide the group into two teams. They all stand in a line one after the other (so you have two lines parallel to each other). Each team has a tray with the same amount of rings on it (you can use fake jewel or Princess rings). On the mark of “GO” the first person of each team takes a pen (this can be a decorated Princess pen), picks the ring up with the pen, runs across a designated area, places the ring in a bowl and runs back. The first person to get all of their rings into the bowl is the winning team. At the end of the game, each guest can pick a ring to take home. One of the coolest Princess party kid games!

Print out pictures of all of the Disney princesses and tape them onto poster boards (each princess on one poster board). If you have more kids you can print out other Disney characters, like Cinderella’s fairy godmother, Aladdin, and other characters from similar movies. Each guest starts out by standing on one of the pictures. Then play suitable music and the kids need to parade around in a circle. When the music stops, whoever is standing on Cinderella (or your child’s favorite Princess) wins a prize. By the end of the game, each child can win a prize (every time a child stops on the designated picture, they get a prize, just make sure everyone stops on the designated picture).

Hang a picture of your daughter’s favorite princess with a crown on her head on the wall. Then give the kids cut-outs of crowns and have them blindfolded and spun around. Whoever is closest to the crown on her head wins! (this can also be “Pin the Wand on the Princess”). If your theme focuses on Cinderella, you can also give this game a fitting twist, of Pin the Slipper on Cinderella. Another twist is “Pin the Kiss on the Frog” (from “Princess and the Frog”) – for this you’ll need a large poster of a green prince frog and cut out giant red lips, one for each guest.

Princess And The Pea Kid Games

Submitted by Elaine from Manitoba, Canada

You need toss cushions and a “pea” (a golf ball or other small ball works). Line the pillows up in a row and hide the ‘pea’ under one pillow. One at a time the princesses take turns sitting on the pillows trying to figure out which pillow the pea is under. Then it’s their turn to hide the pea. This is a great game for preschoolers or if you want a game that has no winners/losers. I found it was a great time consumer too. For older kids you can use a small marble or anything of the sort.

You get about a dozen green apples and red (may need more or less depending on number of children). You set up a bobbing for apples game but blind folded and the red apples are poison (like in Snow White) if child gets green apple, they win a prize, if red – then they’re temporarily poisoned.

Take a look at our complete Princess Birthday Party section for more of the coolest party-planning ideas. 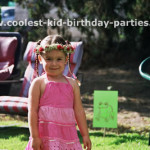