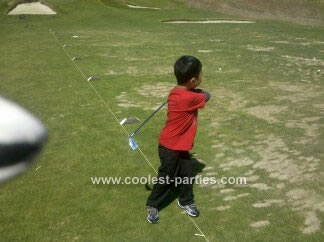 My son wanted something different for his 7th birthday, so we decided to do a magic party. I didn’t want to have to cleanup after 24 kids at my house, so we had it at our local country club.

We invited kids from school AND kids from his afterschool day care. Our invitations were made online from greetingsisland.com and printed from our home printer and then copied at FedEx Kinko.

We prepared with some homemade decorations that were cheap (but looked fantastic). Some stuff that we made were – gift wrapping backdrops (for our mini photo booth, made of 100% gift wrap), and paper wall decor (we got online as well).

On the day of the party, the kids arrived and we had lunch, the country club has their own menu, but here are some ideas: invisible lemonade (lemon flavored water), magic wands (pretzel sticks dipped in melted Parmesan cheese) and magician hats (chocolate covered marshmallows on Keebler striped shortbread cookies).

We hired a magician from phillipandhenry.com. He was amazing! All the kids loved him! We had a fog machine by the door to the party room and it was a great effect! Our main decorations were store bought from Oriental Trading. Stuff we got there: balloons, banners, tablecloths and confetti. The rest was provided by the club, but you can get the whole set on the website!

I made animal balloons (I only knew how to make dogs) and we put on 5 minute plays. I gave them top hats, capes, and magic wands from Oriental Trading and they got in groups of 8 to do their play.

I then started photo booth time and basically hung a queen size bed-sheet and put glittery stars on it and to make sure no other kid disrupts the photo session. I put purple streamers around the photo booth area like caution tape and used chairs to hold them in shape. I used a Polaroid camera and once every kid got their photo, I put them in thank-you cards to give them when they leave. I personally didn’t want favor bags, but they have some at any party supply store.

So after everything, we played Magic Golf, a little game I invented. The country club had a golf course so this was perfect, but if your having this party at home, try your back or front yard.

So the object of the game is to fool the bunny. The first ‘bunny’ to start the game is the birthday boy/girl (they try and see who made which shot). Once the golfer hits the ball, they drop the club and run (kind of like baseball). Then once the bunny hears them running, someone puts a blindfold on them and spins them around 2 times so they can’t tell where the golfer went, they then immediately take off the blindfold to see where he/she went.

They get 2 guesses per person so there should be 24 or something turns (1 per guest). If the bunny gets it right, switch bunnies with someone else (specifically someone who didn’t go yet).

After Magic Golf, we went back to the clubhouse for cake! I made 4 round red velvet cakes, trimmed them 2 inches and stacked them on top of another uncut layer of cake. I used black food coloring w/vanilla frosting and frosted it carefully. Then I made a Pillsbury bread stick, frosted it w/the same frosting, and added left over vanilla frosting and placed it on the “hat”.

Then after the cake, they all left with their photo/thank you cards and they still say they had fun. 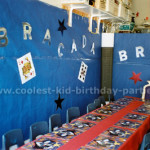