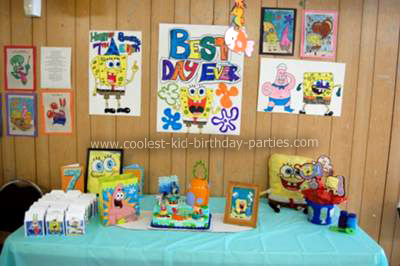 I Googled Spongebob pictures for ideas on how to create my son’s birthday invitations. I found the ones I liked and saved them in ‘My Pictures’ on my computer. I pulled up Microsoft Publisher and created an invitation that looked like a concert ticket. It was measured about 4 x 8 to fit in a standard long envelope. At the top it said “PARTY TIME” with pictures of Spongebob, Patrick and Sandy dancing at a party. Under that is said “Elijah is turning 7! Let’s Celebrate!” … with location, time/date, RSVP phone number… at the bottom it had a section with row, seat, section, and barcode to make it look like a concert ticket. I added other Spongebob characters (see picture). I used Paint.net editing software to edit some of the pictures.

My son’s birthday is in late January so I start planning around Thanksgiving to scope out clearance items and sales. I enjoy making a lot of my decorations so it does take me a long time to have them all completed by the party especially with holidays put in there. I found some great deals at the party store like 50% on this big Spongebob HAPPY BIRTHDAY scene setting kit. It was hung up on one wall with big characters on it.

I found some cute colorful Spongebob garland to hang in drapes in the window. My son LOVES Spongebob so we had a bucket full of small toys with characters from various fast food happy meals over the years. I used those all over from the tables to the window ledges. We rented a local county community center that only has a holding fee so you give them a check and refund it after the party, so basically free. You just have to make sure to not damage anything and clean up very well.

I used lots of crepe paper in blue and green streamed all over from corner to corner and center spots along to make it look like water and waves. My son and I colored lots of Spongebob coloring pages and backed with construction paper to add all over the walls. I had a Spongebob blanket I pinned up on the wall. I used blue plastic table covers on all 4 tables. I blew up 3 pink balloons and added pink crepe paper and hung from the ceiling for jelly fish.

I have a Cricut and cut lots of sea creatures like dolphins, octopus, fish and had those dangling all over from the ceiling. I created those tissue paper Pom Pom balls and had those dang above each table… you can get instructions for those on Youtube, just search “Martha Stuart Party Pom Pom”.

I made a Jellyfish Fields sign just like in the show by drawing it on a poster board that cost me 0.30. I already have markers. I found plates and napkins for 50% off at party store and only bought character plates for the kids and yellow plates for adults. I used a stack of white napkins I had in my stash for adults.

I printed out the Spongebob theme song and put those on the table. I added bubbles to each place setting, I found them for super cheap at a salvage store we have called Hudson’s… I got 3 packages or 6 pack bubbles for about 0.69 each package. I found a $2 off Helium tank Party Time coupon online and purchased one at Walmart that ended up only costing about $18. It blew up at least 30 helium balloons. I had purchased 2 packages of balloons at the Dollar Tree and blew those up and tossed them randomly on the floor.

I got my son’s old sand buckets, sticks from the yard, big Spongebob Stickers backed with Construction paper, tissue paper, hot glue and creativity to make center pieces for each table. I added groups of balloons to those. I tied a balloon to each chair. I can draw pretty good so I purchased a few poster boards at Walmart for 0.30 each and made posters for the wall like one that says “BEST DAY EVER” with a happy Spongebob. I made another one with Spongebob in a party hat with “HAPPY 7TH BIRTHDAY ELIJAH” on it.

I made up treat boxes like little milk cartons and added construction paper and a big Spongebob sticker to the front and filled with 2 gummy krabby patties, tiny watergun, Spongebob fun dip, oatmeal pie little Debbie and balloon. I also let the kids take home a balloon and bubbles. We also rented a Spongebob jump house at our party rental store for about $100.

For fun we had the Jump House we rented and most of the kids just wanted to jump. I had back up activities just in case. I printed a long list of trivia questions and we played trivia game but it was just to waste time and we did it while they ate cake and pizza… no prizes, just fun.

I got butterfly nets at the dollar store because they had the spring items out already in Jan. I only purchased 5 and made up about 5 pink balloons like jelly fish. We tossed them and they tried to catch them. We went outside and everyone tried to blow the biggest bubble. We only had a 2 hour party so we didn’t have a lot of games. Jumping was just about the only thing the kids wanted to do.

It was a 2pm party and we didn’t want to do a lot of food since it was not an eating time really. So we only did plain and BBQ chips with some French onion dip. We got 5 pizzas at Little Ceasers for $5 each… we did Cheese and Pepperoni. I purchased a couple of boxes of those Hugs juice barrels and packages of straws for the kids. For the adults we had sodas like Diet Coke, Coke and Water. The community center had an ice machine.

The cake was from Walmart. I priced several places and this was the best deal. We invited a LOT of kids and the cake only fed 24. So I made up about 48 cupcakes: choc, strawberry and vanilla ones. I used different icing on them all. I just added sugar sprinkles. Thankfully I made the cupcakes because all the cake and cupcakes we eaten… we had about 50 people show up to the party. And we had some kids that didn’t like chocolate and my son loves choc so his cake was marble. I had vanilla cupcakes for them.

The party was a hit and the kids still are talking about how much fun they had. My son can’t believe how many people came to his party and how many awesome gifts he got. He loved it.