The kids all stand in a line behind a rope or string you’ve put on the ground. About 20 feet away from them put another rope or string and that’s where the police officer (birthday kid) gets to stand. The police officer needs to be with their back to the line of kids. The officer then shouts “green light!” and that’s when the kids need to start running towards the officer. Right after yelling “green light”, the officer counts a few seconds and yells out “red light!” and quickly turns around (once the kids hear “red light” they need to stop/freeze). If the police officer catches anyone moving, they must return to the starting line. This continues until one of the players succeeds in crossing the line while the police officer’s back is turned. That player then becomes the new Police Officer.

Pin the Tire on the Racing Car

It is like pin the tale on the donkey but it is pin the tire on the racing car. You’ll just need a big picture of a car and then little tires the kids can try and pin on the car…

If you have a yard or if you live by a park, create a race track/obstacle course. Let the kids put on their cardboard race cars (explained in the ice-breaker section of this theme). Have tires on the ground where kids need to put their feet in and jump, run around cones, jump rivers (streamers on the ground), have a pit stop where they need to pretend and fill their car with gas (use small watering cans of which they need to fill a cup with water), a stop where they need to change their wheels (plates attached with Velcro to the boxes), etc. They can each take turns around the track and race against the clock, or have races between them. Don’t forget to have them make car sounds!

Create a few pit crews (each one having two, three or four people). Provide each crew with a bag that is filled with a variety of things: graham crackers, frosting, a plastic knife, toothpicks, gumdrops, Oreo’s, candies, pretzel sticks, gummy candy, etc. (It’s best if you give lots of different things to choose from and not to make the bags identical). Each crew needs to use these things to design their own racecar in a designated amount of time.

Pin the Number on the Car

This kids party game idea is just like the classic “Pin the Tail.”. You can also play Pin the tire on the car, helmet on the race driver, etc. For any of these try to find a poster or a picture you can enlarge and then hang on the wall.

For this kids party game, divide the group into two teams. Have each team stand in a line one after the other. Give each team a pair of mittens (so that they won’t get their hands black) and a tire to roll. Once the whistle is blown the first person in each team rolls the tire to an agreed upon point, rolls it back and lets the next person do the same. The first team to all finish rolling the tire is the winning team (this can be very funny as the tires don’t always roll in a straight line).

Racecar drivers have to be strong to handle their vehicle, so here’s a great workout for the kids. You’ll need to blow up about 70-80 (better more than less) small balloons. Divide the group into teams and choose one person from each team to be the driver who needs to be worked on, and all the rest of the kids are the “personal trainers”. Divide the balloons between them. Give each driver a driver’s suit (one-piece long underwear or mechanic suit which you can find at thrift stores).

Once the whistle is blown the personal trainers need to make the drivers muscular by stuffing as many balloons as possible into their suits. Give the teams a minute to do this. Once the time is up look at the muscular drivers (remember to take a photo!) and remove and count the balloons. The team that uses the most balloons wins! (The kids can keep on playing this game with a new driver).

Back in the days before video games, boys used to race small electric cars around a wooden or plastic track. These were usually limited to 2 or 3 cars. Now up to 8 cars at a time can be raced on the newer tracks. If a boy doesn’t have a track and cars, often they can be rented at a reasonable rate. Then you can have a ‘real’ Nascar race, in miniature size.

Fill a large clear plastic jar with nuts and bolts (remember to count how many you put in). Each kid then needs to guess how many there are in the bowl. Whoever is the closest gets a prize. To make it a bit trickier, you can also fill up a big jar with little hot wheel cars and Lego tire wheels and ask the kids to guess the number of WHEELS in the jar.

Take a look at our complete NASCAR Racing Party Ideas section for more of the coolest party-planning ideas. 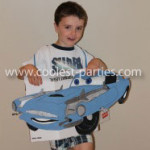