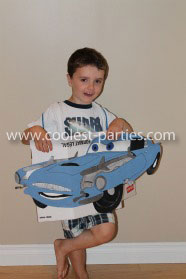 My son is one of the biggest Disney Cars fans. He wanted a Cars 2 party, before the movie was even out. So I had to find out as much as I could about Cars 2 from websites. I researched facts about each new car so that he could have a great time at his Cars 2 party.

The first thing I did was create invitations that looked like tickets.

The invitation told his friends to “Race on Over To Noah’s 5th Birthday”. I included details such as what time the gates opened and closed, what speedway they needed to look for and the directions to get there. I laminated them to keep them strong so they could bring them to our door and gain access to the Cars 2 fun. The children were told to wear Disney Cars T-shirts, if they had one.

I collected various Cars 2 stickers, plastic cups with paper inserts that were personalized with each child’s name on it. Each child decorated their paper with as many stickers as they wanted so they could drink out of them and not mix them throughout the day.

They also coloured Cars 2 pictures or created their own to go inside their personal plate as well. The cups were from Michaels and the plates I found at a dollar store. When the party was over, they each got to take these items home with them.

I also created Cars 2 car boxes. I used an overhead projector to blow up pictures of some of the new cars. My son really wanted Lightning, Mater, Finn McMissile, and Professor Z. I painted them and stapled them onto the boxes and put elastic through the box to hold them on their body.

Another thing the children did was search for clues and find hidden treasure. I had found Cars 2 books that had 12 plastic Cars 2 cars inside. I put each type of car into a ziploc bag and created clues that were placed around the house (I wanted it outside but it was pouring the day of the party). The riddle told them where to look for a clue and when they found a clue, they also found the bag of cars and handed the same type of car out to everyone. I had created a photo album with each child’s name on the front and a picture of Cars 2. Inside I created a poem to describe each car they were looking for and included a picture of each car.

The poem for Lightning McQueen is: Lightning’s rookie days are past. He’s won 4 Piston Cups because he’s so fast. He’s going to enter another big race. And find adventure all over the place.

The Mater poem was: Mater is a tow truck with a lot of rust. His best buddy Lightning is someone he trusts. He’s going to see the world with his friend today. And get into some trouble along the way.

Finn McMissile’s poem: Finn McMissile is a master British spy. He has ultra cool gadgets to catch bad guys. He needs to quickly solve the crime. Before the racers run out of time.

There are more poems for all 12 cars inside the book. When they received their car, they placed it in the bottom photo space and turned the page to find the next one. They had a blast finding clues and filling their books with cars. When they reached the final hinding spot, they actually got the hard cover book that went along with the cars and they put it in their loot bag to take home.

The final game that the kids played was Pin the Tire on Mater. They were blindfolded and I used the car box with the painted Mater. I cut out a donut shape from cardboard and wrapped it in electrical tape. The kids enjoyed trying to get the tire in the correct spot on Mater (the sun came out and we were able to do this game outside).

They had oil for drinks to fill up their tanks (chocolate milk) and I served “race track” snacks (popcorn, chips, candy in Cars 2 bowls). I served hamburgers and called them their spare tires. The cake was Professor Z and can be found on the coolest cake site.

There were Cars 2 decorations around the house to add to the theme. The kids had a great time and before we knew it, parents arrived to take their child home. My son said it was one of his favorite party so far. I think I should start now to prepare for his party next year. But the smile on each of the party guests made everything worth it! 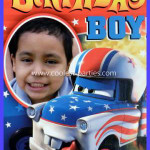