This game has the same concept as musical chairs. Place a pile of red sponge clown noses on a table or on the floor and have the kids walk around them in a fairly large circle while music is playing. Once the music is turned off the kids need to grab a nose and put it on (there needs to be one less clown nose than there are kids). Whoever is left with no clown nose to put on needs to leave the game. The game continues until there is one kid remaining (who is the winner).

This is one of the classic, old-time favorite kids party games that fits perfectly with this theme. Fill up a large container with cold water (and ice.), drop in some apples and have the kids bob for apples without their hands (they need to dunk their head into the container and bite onto an apple).

This can be a lot of fun. Put on circus music and have guests dress-up, decorate their bikes, scooters, wagons, etc. and have a circus parade around the house or in the neighborhood. You can also take a box, make a hole in the bottom and let the kids wear it on their waist as a wearable circus wagon (turn box over so that the hole is on the top). You can cover the box with bright colored vinyl adhesive or paint them with bright colors.

The kids can paint or color pictures of animals, clowns, acrobats, etc. prior to the parade. You can staple on straps to wear on their shoulders (crisscrossing the strips on the shoulders will prevent the boxes from slipping off). Kids can also walk in a row as elephants, one after the other with their hands in front as trunks. Give out horns, whistles, and basically anything that makes sounds (of course if you have a smaller group of kids you can simply take them to a real carnival or circus and have a fun time there).

Pin The Nose on the Clown

This is a variation of one of the classic kids party games – pin the tail on the donkey. You can create a clown face by cutting out a big circle out of cardboard. Add yarn for hair, a triangle hat, and paint on facial features (except for the nose). Then blindfold each kid, give them a red circle with tape or glue on the backside and let them put it where they think the clown’s nose should be.

This is one of those classic kids party games that can be HILARIOUS! Kids will have so much fun throwing cream pies at an adult’s face. Make sure the “victim” is wearing a large plastic bag to cover them from getting completely messy. Take pie tins, fill with lots of whip cream and let the kids throw them. A variation of this is to use wet sponges.

Divide everyone so that each kid has a partner (this is a race that needs to take place outside or in a spacious room). Line the partners up back to back at a starting line. Put a balloon between them (with no helium) and have them squish it so that it doesn’t fall (and not too hard so as not to pop it). Once the whistle is blown they must take off in this exact position and shuffle their way to the designated finish line (if a balloon falls or pops they need to start again from the starting line). The first pair to get to the finish line wins.

Take a large box and cut out one side of it. Then put a little sheet over the cut out side so that you can lift it when you need to and cover it when you need to. On the other side cut two armholes. Then take two sleeves from an old sweatshirt and duct-tape them to the holes so that no one peeks through the holes. Then let the kids stick in their arms and only by touch they need to guess what’s in the box. Since the other side is open you can always change the objects. You can put ordinary things like a toothbrush, spatula, light bulb, or even wet and gross things like a squished ripe tomato :-). You can then paint the outside with bright colors and cover it with lots of big question marks. One of the coolest kid party games.

Divide the group into two teams. Position each at the starting line and about 15-20 feet away have a finish line. At the finish line have two similar clown outfits for each team – this can include huge shorts, oversized shirt, suspenders, a wig, a hat, huge pair of shoes, a clown nose, a bow tie, jumbo glasses, etc. Once the whistle is blown the first person on each team needs to run to the finish line, put on all the clown clothes, run back, strip and tag the next player who puts on the outfit, runs to the finish line and back, etc. The first team to complete the relay is the winning team.

This fun game is great for outdoor summer parties. You’ll need a big yard or have the party at a park. Fill up lots of water balloons prior to the party. Have each kid choose a partner and have them face each other from a short distance. They then need to throw the balloon to their partner (without it popping). Once they catch the balloon, each player takes a big step back and so forth until. Whichever team that throws the farthest distance without the balloon popping – wins.

Have a jar full of colorful candies (skittles, M&M’s, jelly beans, etc.) and have everyone guess the amount of candies they think is in the jar. Whoever comes closest wins the jar of candy!! (Make sure to count the candies while putting them in the jar.)

Take a look at our complete Circus Kids Birthday Party Ideas section for more of the coolest party-planning ideas. 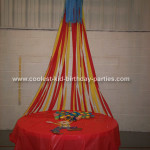